Writers on reading: Quotes about the importance of books

Readers may enjoy having quotations about the meaning of books to motivate, inspire or elucidate their reading experience. Quotations can naturally be used on gift inscriptions, in private journals or perhaps to decorate a reading room. Avid readers are likely to pick up their own favorite passages during their own literary adventures. For those who would like suggestions, the following items are offered.

"We must not be willing to suffer through quiet lives of discontent."
- Stephen Butler Murray, "Deliverance Where the Streets Have No Name," printed in "Get Up Off Your Knees: Preaching the U2 Catalog" (2003)

While this line is not explicitly about books, it was doubly influenced by literature. In the first place, it is a modification of Henry David Thoreau's line, "The mass of men lead lives of quiet desperation. What is called resignation is confirmed desperation." In the second place, it is an interpretation of the lyrics in a rock song by U2, "And when I go there / I go there with you / (It's all I can do)." The statement thus demonstrates how one may form an idea from what one reads and then use one's literary skills to express it.

Literature gives a voice to angst, whether mild discontent (ennui, perhaps) or sharper forms of desperation. In naming the displeasure and dissatisfaction, and in calling them out, literature not only provides a way to cope with disappointment but can even prompt someone to find more meaningful ways to live that make life seem more rewarding and more heroic.

Similarly, the scientist Richard P. Feynman said in a lecture in 1963, "Throughout all the ages, men have been trying to fathom the meaning of life. They realize that if some direction or some meaning could be given to the whole thing, to our actions, then great human forces would be unleashed." 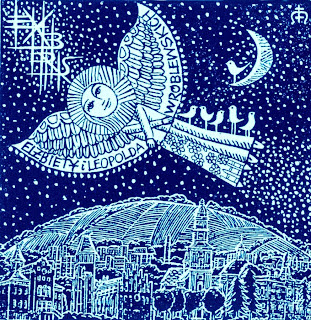 Penetrating the sanctuary of the heart

"...she felt briefly penetrated, as if the bright winged thing had actually made it to the sanctuary of her heart..."
- Thomas Pynchon, "The Crying of Lot 49" (1966)

In Thomas Pynchon's novel "The Crying of Lot 49," a character named Oedipa ponders a play called "The Courier's Tragedy." This play, allegedly from the 17th century, does not really exist; it is a fictional creation within the novel's world. Specifically, Oedipa wonders why a director of a performance of this play, Randolph Driblette, inserted two additional lines. It appears to be important information, or perhaps a code. Oedipa asks Driblette about it, but he declines to answer and then commits suicide, so Oedipa understands that she will not have the chance to learn the truth from him directly.

In referring to the unknown treasured parcel of information as a "bright winged thing," Pynchon may have been alluding to Edith Wharton's use of the phrase in "The Writing of Fiction" (1925):

"It is true that the gist of the matter always escapes, since it nests, the elusive bright-winged thing, in that mysterious fourth-dimensional world which is the artist's inmost sanctuary and on the threshold of which enquiry perforce must halt; but though that world is inaccessible, the creations emanating from it reveal something of its laws and processes."

Wherever that phrase comes from - "bright, wingéd thing" earlier appeared in the poem "To a Dead Bird" in "The Nests at Washington" (1864) by John James Piatt and Sarah M. Bryan Piatt - the other arresting part of Pynchon's line is that this birdlike idea may have briefly "made it to the sanctuary of her heart." This evokes centuries-old Christian imagery of the dove of the Holy Spirit descending on people. It is about the glimpse of truth and beauty that people reach through literary analysis.

"The blissful feeling of being alone with the forbidden book, in a room with no telescreen, had not worn off."
- George Orwell, "1984" (first published in 1949)

In "1984," the government is so oppressive that it is able to read people's minds and executes them for what it calls "thoughtcrime." The "telescreen" is a two-way television screen planted ubiquitously to monitor people's activities at all hours of the day.

When the hero of the novel finally manages to get his hands on a heretical book that exposes and challenges the views of the government, his "blissful feeling" at having an opportunity to read something of political relevance, especially when he believes he is not being monitored, is a feeling that is more powerful than his chronic malnutrition. He wants books more than he wants food. The opportunity for critical thinking in safety and privacy is essential to his consciousness of his own humanity.

Those of us who are fortunate to have the freedom to read books may remember that not everyone shares the same freedom. Our enjoyment of a book may increase simply by reminding ourselves that we are fortunate to read it.

Imagine a library of unread books

"Read books are far less valuable than unread ones."
- Nassim Nicholas Taleb, "The Black Swan: The Impact of the Highly Improbable" (2007)

This point made it onto the first page of Taleb's book. Book collectors are often asked whether they "have read all those books" on their shelves. Taleb argues that "no" is a respectable answer, as there is generally no need to retain a book whose information one has already absorbed.

"Every Jan. 7 I clear out all the books I've read in the past year and take them to a hospice. I already have five boxes full in the car, and I'm not done. The only books I have are some novels that I will never be able to get again, which are mostly in Spanish, signed books, and first editions. My husband has a collection of classics in beautiful leather covers, but I don't think he's read any of them."

Taleb's pithy expression of the value of an unread book is inspiring for people who keep books that they intend to read someday.

Find your own gems

Writers are keenly aware of the value of reading, as they themselves have learned to write from reading the books of others and have been influenced and inspired by other writers. Thus, many books contain explicit references to the importance of reading. As you embark on your literary adventures, keep a lookout for different perspectives on why reading is important.

Posted by Tucker Lieberman at 9:42 PM