The documentary "The God Who Wasn't There" (Beyond Belief Media, 2005) attempts to demonstrate that Jesus never existed. Although the film's research and presentation is rough around the edges in many respects, it does contain some leads on the historical evidence for Jesus that will be of interest to the serious student.

Interpreting Jesus as a myth, not a historical person 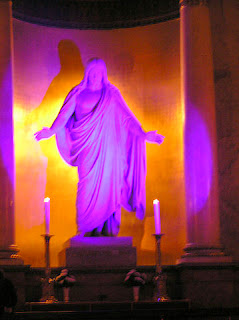 Writer, director and narrator Brian Flemming questions a curious stretch of several decades between the death of Jesus (around 33 C.E.) and the Gospel of Mark (written after 70 C.E.). "Most of what we know about [Jesus in] this period," Flemming explains, comes from a man named Paul who traveled, evangelized and wrote several documents about the budding religion which "represent almost all we have about the history of Christianity during this decades-long gap."

"If Jesus was a human who had recently lived, nobody told Paul," Flemming quips. He says that Paul neglects to mention many significant details of the life of Jesus, including his parents, his ministry, his miracles and his trials. Paul does mention the cross, the resurrection and the ascension, but "even these Paul never places on Earth. Just like the other savior gods of the time, Paul's Christ Jesus died, rose and ascended all in the mythical realm." Flemming concludes that "Paul doesn't believe that Jesus was ever a human being. He's not even aware of the idea."

The film offers illuminating and tantalizingly brief interviews with historian Richard Carrier, who notes that "allegorical literature was extremely common" in that era and says that Mark the Evangelist was writing symbolism, and with the late professor of folklore Alan Dundes, who points out that some Christian movements disapproved of the religion's mythic elements and preferred to dismiss some tales as apocrypha rather than admit them into the canon. Dundes seems not to believe that this was ever a viable strategy, given his warning, "If you take away the folklore from the Bible, you don't have a heck of a lot left."

Dundes offers a riveting analysis of the literary characteristics of the hero, taken from a book he edited called "The Study of Folklore." The upshot is that Jesus embodies 19 of 22 typical biographical elements of a mythic hero (where Oedipus has a perfect score, and Hercules, Zeus and Robin Hood score not far below Jesus). These elements include being born of a virgin, enjoying an unremarkable childhood, ascending to a throne and issuing laws, then being forced out and suffering a mysterious death at the top of a hill. In a similar vein, interviewee Robert M. Pride, author of "The Incredible Shrinking Son of Man" cites the mythical resurrections of gods including "Mithras, Attis, Adonis, Osiris, Tammuz," where "nobody thinks these characters are anything other than mythical, and their stories are so similar...it just seems like special pleading to say, 'Oh, in this one case [of Jesus], it really happened.'"

The screen flashes two quotes from the church father Justin Martyr who acknowledged the similarity of Jesus to other popular gods, and simply insisted that the earlier gods were fictions propounded by Satan and that Jesus was the best version of the myth.

Text rolls across the screen claiming that similar characters' births occurred on Dec. 25, heralded by stars and attended by Eastern Magi; that they healed the sick, cast out demons, and turned water into wine; that they rode donkeys and were betrayed for 30 pieces of silver; that they descended to hell, ascended to heaven, and offered bread and wine that represented their flesh and blood.

What goes wrong with the film's analysis

Aside from this intriguing information, however, the film has little to offer.

None of the Christians interviewed by Flemming are knowledgeable or articulate about these parallel myths. He selects only young, hapless Christians-on-the-street outside a Billy Graham rally; an apology from an odd proponent of a literalist belief about the Rapture; and an administrator of a Christian school who seems knowledgeable but wasn't given a chance to finish his sentences. The atheists or secularists in this film, by contrast, are scholars who were allowed to talk about their fields.

The interview with the school administrator is particularly embarrassing to the filmmaker. Soberly weathering the rapid-fire questions and non-sequitur interruptions, the administrator's answers were coherent and unoffensive, and he comes off as a sympathetic figure. He seems not to have understood that he was going to be in an atheist documentary, having agreed only to be interviewed on "the education of children," and he walks off the camera. Cue applause for him.

The Christian school in question was selected only because Flemming himself attended it as a child. He said he grew up fearful that he would go to hell because he harbored religious doubts. The entire film, then, can be easily interpreted as a sort of personal therapy for him. In the last scene, he jumps in the chapel and declares with a sort of junior-high glee, "I deny the Holy Spirit!" It is tempting to applaud for him, too, except for the viewer's suspicion of having been somehow "used" by him as an unwitting voyeur for this rather personal moment.

Much of the film looks cobbled together. There is a six-minute string of clips from old movies about the life of Jesus, abridged and fast-forwarded until it looks farcical. There are another four minutes of exceedingly violent clips from Mel Gibson's box-office mega-hit "The Passion of the Christ" accompanied by an analysis showing that nearly all of the film's 109 minutes contain depictions of violence. The filmmaker provides weirdly militaristic clips of "U.S. Christian Soldiers" from 1982 and virtual "Force Ministries" from 2002, plus a photo montage from Abu Ghraib. Other setups are nonsensical, such as juxtaposing healthy young Christians who look happy to discuss their religion with portraits of clearly psychotic killers Charles Manson and Dena Schlosser, and a still photo of the burning Branch Dravidian compound in Waco, Texas in which perished dozens of cult members are tastelessly referred to as "crispy fans" of Jesus.

Facing the question posed by a tiny fringe Christian group that insists that God hates gay people, Flemming does not attempt to disagree. Rather, he cites Leviticus and the Gospel of Luke and concurs with the hate group's Biblical reading, complaining only: "The real question is why moderate Christians don't agree with God, because when it comes to his rules, God is not a moderate." He goes so far as to say: "The Inquisition was not a perversion of Christian doctrine; the Inquisition was an expression of Christian doctrine." If Christians accept that the Bible is wrong on certain points, then, Flemming says, they are left with theologically undesirable positions such as:

"Jesus was only sort of the son of God? He only sort of rose from the dead? Your eternal soul is at stake but you shouldn't make a big deal out of it? Moderate Christianity makes no sense. Is it any wonder that so many people choose Christian leaders who actually have the courage of their convictions?"

This sort of baiting and goading of moderate Christians, who are pursuing such innocuous and noble goals as the integration of faith and modernity and the reconciliation of the virtue of personal discipline with the freedom of liberal democracy, is not helpful. One may believe that the project of moderate religion is ultimately psychologically impossible or logically untenable and that the best solution is atheism, but this does not mean that moderate religion is not respectable, honorable, personally worthwhile for some people, and a positive contribution toward world peace.

Most significantly, Flemming's rejection of moderate Christianity contradicts his own thesis at the beginning of the documentary where he advocates for a mythological understanding of religion. Many people who agree that Jesus is an allegory happen to identify as Christians rather than as atheists. By tarring them as "moderates" lacking in "courage" and making "no sense," Flemming implicitly compliments and therefore emboldens religious fundamentalists, alienates potential allies who just so happen to call themselves Christians, and demonstrates refusal to intellectually explore religious views that may be strikingly similar to his own atheist view.

This article was originally posted to Helium Network on Sept. 20, 2010.

Posted by Tucker Lieberman at 8:27 AM