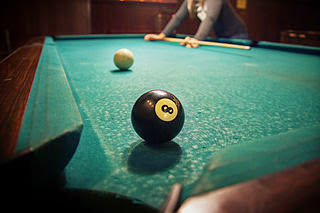 Sam Harris's book Free Will is a brief synopsis of the question of whether humans have free will. We feel that we are making decisions, but we also know that we are at least partly determined by natural causes. On a pool table full of billiard balls hitting other billiard balls, the path of each ball is predetermined, and no ball moves of its own free will. We do not like to think of ourselves in that way, yet this is the implication of saying that all action is initiated by the physical brain, which is itself acted upon by other physical influences. Harris leans toward the side of saying there is no free will.

Sam Harris's book will not be summarized here. Instead, we will look at two critiques.

Linetsky says that "modern philosophy" is "dangerous" to its "victim[s]," as those philosophers who "reject reality" may cause "detachment" and "confusion." (Why specifically modern philosophy, I cannot say.)

Linetsky champions free will by saying, "we know it to be obvious by means of introspection," and that to deny it is "ludicrous and beyond rational comprehension." Everything from a small act of paying attention to being able to take personal responsibility for one's actions requires free will. He points out that Harris accepts the existence of the universe and human consciousness by saying that they are obvious to us. So why, he asks rhetorically, doesn't Harris accept the existence of free will on the same basis? He also suggests that if there is no free will, then people have no control over anything they think; this, for some reason, means they cannot have certainty about any of their conclusions, and that Harris's argument is therefore "invalid."

This line of argument by Linetsky is not persuasive. Just because we assume the existence of some things (at least provisionally) does not mean we should decisively and permanently accept the existence of everything. Also, to the extent that certainty is a feeling that arises when we are confronted by evidence or logic that seems persuasive to us, there is no reason that the lack of free will should deprive us of this feeling. It is simply that our feeling of certainty would be determined, along with the thoughts and experiences that bring it about. Furthermore, in either a determined or a free universe, whether Harris feels certain about his own conclusion has nothing to do with whether his argument is logically valid.

Linetsky goes on to say that if our careful deliberation about our many choices – significant and insignificant – is just an illusion, because the outcome of our thought process is already determined, and we are "self-deluded about all of these things all of the time," then we can have no true learning, knowledge, or understanding. The deterministic view must be rejected on the basis, it seems, that this idea is unpleasant.

Pleasant or no, that has nothing to do with whether it is true. Maybe abandoning belief in our own free will does not reveal learning, knowledge, and understanding to be impossible, but rather provides an opportunity for us to redefine what they are. Today there is much investigation into "artificial intelligence." If it is possible (at least in theory) to program a robot to learn, know, and understand, perhaps our own thought and experience is rightly understood along the same lines. This may seem terrible, but it is only redefining and reinterpreting the meaning of human intelligence. What we originally thought about our own intelligence might turn out to have been an illusion. This does not mean that there is no such thing as intelligence.

Linetsky does bring some important insights to the debate. He says it prejudices the investigation to emphasize neuroscientific observation of physical brain activity and to de-emphasize behavioral observations of decision-making in real-life contexts. Moreover, just because the origins of thought are dark and mysterious and that the chain of events stretches back indefinitely far into the past does not enable us to assume that the germ of "free will" can never be found. Linetsky comes down too strong on these points, however. He says that a person's behavior is itself "sufficient evidence to demonstrate the existence of free will." (It is not; the explanation of the person's behavior is the very question at issue.) He also tries to dodge the question of the infinite regress of causes by saying that "free will" is contained in the moment of decision and that the unmanageably long list of causes predating that moment can be waved away. (They cannot; the question of whether the moment of decision is truly "free" hangs on whether it was controlled by other influences.)

Free Will: A Response to Sam Harris by Kurt Keefner (2012)

He pinpoints a problematic passage in Harris’s book: "Consider what it would take to actually have free will. You would need to be aware of all the factors that determine your thoughts and actions, and you would need to have complete control over those factors." He rebuts this definition of a free being as one with “no unconscious processes at all within it, a completely pure consciousness all the way down.”

He concludes that Harris's "philosophical case collapses" because there is no clean divide between unconscious and conscious processes and therefore the conscious ones cannot be purely controlled by the unconscious ones. He also provides a compelling critique of the particular neurological experiments that Harris chose as examples, explaining why they do not demonstrate what Harris says they demonstrate.