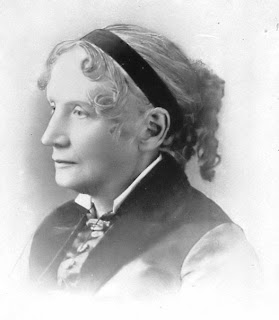 Harriet Beecher Stowe was born to a Protestant family in Connecticut in 1811.  Her seven brothers became ministers, and this fervently religious setting directed her course as a prolific writer.

In 1896, the year of her death, the publisher Houghton, Mifflin and Co. released her writings in a multi-volume set.  The fifteenth volume consists of Religious Studies, Sketches and Poems, much of which – according to the publisher's introductory note – was derived from her early work The Mayflower.  This volume gives the reader a good overview of Stowe's explicitly theological writings.

Stowe has special feelings for the Old Testament because it served as the Bible to the Jew known as Jesus, but this does not imply that she has much affection for Judaism as a religion.  Her general characterization of Jews is that in ancient times they betrayed Jesus and that in modern times they continue to predict the coming of the Messiah while missing the critical fact that the Messiah already came.  As for Catholics, she appreciates that they revere Mary more than most Protestants do, but she has no truck with what she sees as "Popish" fanaticism.  She reminisces about the "unbroken stillness" of her uncle's "Puritan Sabbath," but does not spend words on the condemnation of vice that is usually tagged as Puritanism.

In sum, her religious sensibility is her own. She takes what she likes from other varieties of religious thought as she understands them, and comfortably leaves the rest behind.

She has no doubt that Jesus is the one true Messiah the entire world has waited for.  For Alcibiades, Socrates, and Virgil, Jesus would have been their longed-for presence, she is certain.  She goes on:  "He was the 'Star' of Balaam, the 'Benefactor' of the Chaldee astrologers, the 'Saviour' predicted by the Persian Zoroaster...He belonged not to any nation, but to the world..."

The book paints a vivid, literal picture of Jesus and Mary in their time.  Stowe imagines that Mary treated the knowledge of her lineage from King David as "the one hoarded gem of her poverty and neglect - like a crown jewel concealed in the humble cottage of an exiled queen."  Once her son Jesus realized his vocation in adulthood, his words, though issued sparingly, seemed that much more "concentrated and sparkling like diamonds that had been slowly crystallizing in those years of silence".  Finally, the crucifixion: "The rough hand of a brutal soldier has seized his robe to tear it from him.  Another with stalwart arm is boring the holes, gazing upward the while with a face of stupid unconcern.  There on the ground lie the hammer and the nails..."  With language like this, the narratives of these divine characters are brought nearly to life.

By contrast, Stowe's pronouncements about virtue are so generalized as to be ineffective.  They are so unspecific that one could read the entire collection and not realize that she had an opinion about slavery.  (Her most famous book, Uncle Tom's Cabin, was originally published as a serial novel in an abolitionist newspaper in the early 1850s and remains popular today.)  Indeed, race relations are never mentioned in this collection, nor are any other issues that might be of culture-bound concern and therefore of historical interest.  Instead Stowe makes vague suggestions along the lines of "avoid[ing] harsh judgments, and harsh speech, and the making known to others our annoyance".  What she expects the reader to take away in the form of practical advice is a little unclear.

Generally, she's interested in the problem of facing death.  Many people in the nineteenth century died young, stricken by sudden, mysterious illness.  In her view, it was the task of religion to offer some comfort.

The book is capped with some spiritual verse.  The primary value of these lines is the historical fact that they were penned by Harriet Beecher Stowe.  Those who genuinely are excited when "cross" is rhymed with "All else is but dross" or who seek the insight that "In the frozen buds of every winter / Sleep the blossoms of a future flower" will enjoy the poems for their intrinsic literary value.  Others might find the verse forced in form and tired in content.

If there is any belief in this volume of Stowe's early work that might be perceived as edgy, it is her association of Jesus with the divine feminine.  Because Jesus had no mortal father, she writes, "there was in Jesus more of the pure feminine element than in any other man.  It was the feminine element exalted and taken in union with divinity."  Some pages later she claims that "His mode was more that of a mother than a father."  Her ideas about gender would go on to inform her later work, as addressed by Prof. Gayle Kimball in The Religious Ideas of Harriet Beecher Stowe.

Posted by Tucker Lieberman at 8:03 AM