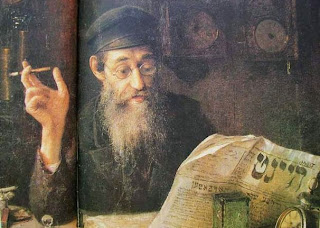 The Veterans of History: A Young Person's History of the Jews is a new work by Mitchell Silver that gives a history of the Jewish experience, aimed at a young adult reading audience. As the author explains in the acknowledgements, he has long been interested in sharing "a secular interpretation of Jewish history shaped by progressive values," and in the preface, he describes his new book as "analyzing social, economic, and ideological forces into their simpler components".

He has accomplished this admirably as, in 336 pages, The Veterans of History wrestles with three or four thousand years of Jewish history. The result is appealing and informative to adults as well as to younger readers. Drawing from his decades of experience as educational director of the Y. L. Peretz School of Boston Workmen's Circle, and as cultural director of Camp Kinderland, Silver weaves old stories in a new way.

He begins by explaining that Jewish history is wide and varied, that history is selective storytelling, and that he has chosen to particularly emphasize the cultural detail that is most likely to be of personal significance to his American Jewish readership. In highlighting how he constructs his story, Silver prompts readers to imagine multiple possibilities for how they might choose to think about history.

The book's narrative begins with the Biblical era. The author does not run through a long list of Bible stories, but rather mentions a select few of historical relevance without delving into mythic or symbolic interpretations, paying greater attention to the politics and culture of that time. From there, he proceeds to Jewish life under Persian, Greek and Hasmonean rule in the last few centuries B.C.E., followed by Roman rule.

Some religious history buffs who are accustomed to reading about Christianity might be surprised that, from a section headed "The Beginning of Christianity," a scant five pages advances the reader to the second century C.E. But this is fitting, as Silver has chosen a distinctly Jewish perspective for the book. (For those who are interested, there is an abundance of other material on this influential window of time in religious history. Take, for example, the recent book Zealot: The Life and Times of Jesus of Nazareth by Reza Aslan, which focuses on Jewish sects.) Why, indeed, should this particular time period demand more attention for the study of Jewish life than other influential periods, such as the Muslim caliphates, or medieval Europe, for that matter? The section on medieval life includes a number of fascinating, little-known details, such as the introduction of a mandatory yellow badge for Jews in 1215 and the "court trial" of a Talmud (religious book) in 1240. Silver's history continues through the messianic aspirations of Sabbatai Zevi during the Renaissance; the growth of Reform Judaism in the United States in the 19th century and the peak of Yiddish culture there in the early 20th century; and the Holocaust and the founding of Israel.

One key feature that is important to understand is that this is not really a history of Judaism, but rather of the Jewish people. That is, it is not limited to a theological or ideological analysis; it takes a broader view of the many forces that shape people's lives. It is about Jewish people in the many places and times in which they have lived, influenced by different cultures and languages, and how they have been affected by their interactions with people who are not Jewish as well as with Jews who live in other lands. It is about the experience of persecution and of living in the Diaspora (outside of Israel). Theology and ideology are only parts of this tapestry. Silver manages to shape the backbone of his narrative according to his beliefs and values without allowing his opinions to noticeably intrude on his presentation of the facts. He does not overtly pass judgment of right and wrong on subtle or thorny theological issues. He therefore does not attempt to define how "Judaism" ought to be understood.

The book has great value for anyone interested in an outline of the long history of Jewish life and thought - especially one that is delivered in accessible language and does not assume prior knowledge of its topics - or for anyone who is curious about what a humanist approach to Jewish history and culture can look like.

Posted by Tucker Lieberman at 12:47 PM