'Why shouldn't I be baptized?': A rich, castrated African meets an Apostle

The eunuch, a servant of the queen in Ethiopia, asks the Apostle Philip: "Why shouldn't I be baptized?" Philip baptizes him. 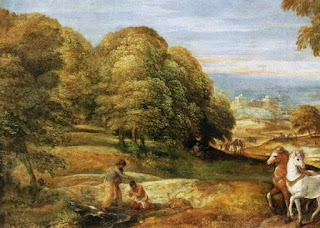 In Chapter 8 of the New Testament's Book of Acts, verses 26-40, a eunuch official of the Ethiopian queen has just completed a religious pilgrimage to Jerusalem and is beginning his return journey south. The Apostle Philip overhears him reading aloud a passage from Isaiah 53:7-8 that laments unjust humiliation and lack of descendants. Philip takes the opportunity to accompany the eunuch for a short distance and tell him about Jesus, and the eunuch asks Philip to baptize him.

If indeed the eunuch was a real historical person, and not only a figure in a parable, it is not clear that his baptism would have represented his actual conversion to Christianity. The King James Version of the Bible published in 1611 includes a verse (Acts 8:37) in which the eunuch professes his new Christian faith immediately before being baptized. However, the Rev. Dr. Charles Francis Potter in "The Lost Years of Jesus Revealed" explained that this line "is not in our four oldest Greek manuscripts, Codexes Vaticanus and Sinaiticus of the fourth century and Codexes Alexandrinus and Ephraemi of the fifth.'" Modern translators of the Bible recognize that this line was added to the text perhaps a century later to deliver a certain theological teaching, and newer publications include the verse only as commentary in the margin.

We do not know the race or religion of this nameless eunuch. He may have been connected to the Essenes, a Jewish sect popular around Jesus's time, as suggested by Potter, since baptism was popular among the Essenes. Potter further speculated that the Ethiopian queen may have sent him on the thousand-mile journey to Jerusalem to retrieve religious writings such as the apocryphal Book of Enoch. This would explain why he was in possession of a scroll with Isaiah's text, and why he bothered traveling to Jerusalem when castrated men were explicitly forbidden from the Temple (Deut. 23:1).

Warren Gage, an Old Testament Professor at Knox Theological Seminary, wrote in "The Ethiopian Eunuch Finds Joy" that according to "tradition," the Ethiopian eunuch

"fathered the Coptic Church... It is the church that gave us Clement of Alexandria, Origen and Athanasius. Through the centuries, the millions of this church call this eunuch their father. He, a eunuch, was chosen in the good mercies of to be the father of faith in Africa!"

The word "eunuch" sometimes refers to a position typically held by castrated men rather than indicating whether a particular individual was actually castrated (a matter that would be impolite to verify in most social contexts). It is reasonable to question whether the individual described in Acts was castrated. Scholz questioned why none of the early Church Fathers who castrated themselves, such as Origen, mentioned this Biblical episode; had they recognized the Ethiopian eunuch as physically castrated, surely they would have seen him as a role model.

However, Mathew Kuefler pointed out in "The Manly Eunuch" that the late-fourth-century St. Jerome once expressed his preference to refer to the Ethiopian eunuch as a "man" because of "the vigor of his faith." (He also recommended a pilgrimage to the fountain at Bethsur near Hebron where the eunuch was thought to have been baptized.) Had Jerome not believed this individual was actually castrated, he would not have needed to explicitly dignify him as a man. Furthermore, Africa has a long history of castrating slave boys, so the idea of an Ethiopian eunuch is not far-fetched. For one more modern example, Britain's foreign office learned in November 1884 that the Ottoman Sultan had a ship bound for Zanzibar that contained eight slave children, half of whom were castrated boys from Ethiopia. (Britain opposed slavery but did not wish to offend Zanzibar; ultimately they did not search the ship, according to Ehud R. Toledano in "The Ottoman Slave Trade and Its Suppression: 1840-1890.") This is only one example representing countless such offenses throughout history going back to ancient times. It is thus quite plausible that the nameless Ethiopian eunuch in the Book of Acts - if he was a real person - indeed was castrated, and that the Biblical reference to him as a "eunuch" together with his interest in Isaiah's lament of lost descendants was an attempt to convey the fact of his castration.

Castrated men were considered damaged in a Jewish tradition that placed high value on descendants. In the ancient world overall, they were often loathed because of their association with servitude; many castrated men were slaves themselves and were compelled to participate in the slave system by guarding harems of kept women. Some, like the Ethiopian eunuch in Acts, rose to positions of wealth and power in royal courts and were given servants to drive their horses on long journeys, yet still were not free according to our definition of the term today.

Given his situation, the Ethiopian eunuch can be seen as a role model for self-respect and spiritual autonomy. Acts 8:36-38 (New International Version 1984) tells the story:

"As they traveled along the road, they came to some water and the eunuch said, 'Look, here is water. Why shouldn’t I be baptized?' And he gave orders to stop the chariot. Then both Philip and the eunuch went down into the water and Philip baptized him."

The queen's official perceives that he is as entitled as any other human being to receive a sacrament from one of Jesus's twelve Apostles and he takes the initiative to perform the action without delay. The event is a popular subject in Christian art, for example, in this painting by Rembrandt Van Rijn. The story of the Ethiopian eunuch thus has an important place in Bible study and in religious history.

Learn more on the Wikipedia article for "Ethiopian eunuch."

Posted by Tucker Lieberman at 6:32 AM