‘The dead are everywhere but the ground’: The vision of ‘Fugitive Pieces’

Anne Michaels' novel "Fugitive Pieces" is a beautiful and haunting treatment of one person's view of the world. The story follows the fictional character, Jakob, as he grows from a young Holocaust survivor into a mature intellectual. Michaels delivers the poetry of life and death as emoted by a person who has gone through severe trauma.

"The shadow-past is shaped by everything that never happened. Invisible, it melts the present like rain through karst. A biography of longing. It steers us like magnetism, a spirit torque. This is how one becomes undone by a smell, a word, a place, the photo of a mountain of shoes. By love that closes its mouth before calling a name." 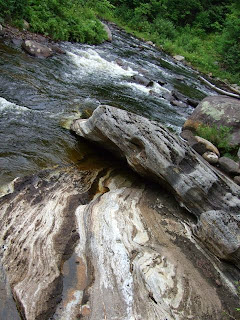 Some readers are uncomfortable with such an abstract literary treatment, given that the real history of the genocide is all too concrete for Holocaust survivors. Indeed, those looking for a novel replete with historical details about the war will not find it here. This story, instead, follows a boy who is spirited away from the war-torn area and grows up in a relatively safe, idyllic area, raised by a scholar who teaches him to see the world through the lens of geology and Greek. He would be happy, if not for his traumatic memories.

Jakob is blissfully ignorant of parts of the war that continue to rage elsewhere. "While Athos," he says, referring to his savior, guardian, and tutor, "taught me about anabatic and katabatic winds, Arctic smoke, and the Spectre of the Bröcken, I didn't know that Jews were being hanged from their thumbs in public squares." Jakob is isolated from such terrible international news. To him, the war still consists of the violence he saw in his family's home, when they were stormed by surprise and he saw his mother's sewing box of buttons spill onto the floor, an image that stands in for the unspeakable violence that must have followed. Only as an adult does he realize the full extent of the horrors that continued to affect others.

The memory of his murdered family follows him. Over and over, wherever he goes, he feels their presence, particularly that of his sister. As he puts it, "the spirit in the body is like wine in a glass; when it spills, it seeps into air and earth and light," and therefore "the dead are everywhere but the ground." In his adulthood, the memory of his sister becomes an obsession. It interferes with his marriage. He wants to be happy, but he cannot forget the past. His loyalties are torn between the living and the dead.

This novel is well worth savoring for its unique voice and perspective.

Photograph: A river near a cave in Pottersville, New York. The rock suggests an interesting geological history. Photo by Tucker Lieberman.

Posted by Tucker Lieberman at 1:54 AM