A hundred types of transgression - or more

It is often claimed that, all over the world, certain acts are seen as clear-cut examples of moral wrongdoing, regardless of the cultural background of the one who is asked to judge them. Everyone opposes the unprovoked killing of other people. Everyone is offended by lying and stealing. Everyone, that is, except psychopaths. These things are wrong by definition. Furthermore, acts that suggest character traits such as disloyalty and greed also tend to receive widespread disapproval. 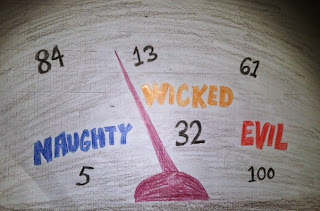 Yet, even if there is agreement about which actions are wrong, this does not entail that all wrong actions are equally wrong. "Anthropologists have found," Lance Morrow wrote in his book Evil: An Investigation, "that when they ask people to describe the most evil act they can imagine, different cultures may produce different answers." Americans and Europeans are likely to mention violence against children, while Japanese may mention greed and corruption in politics. This raises the question of whether there is a workable scale.

The American forensic psychiatrist Michael Stone, interviewed by Max Miller in 2010, explained his 22-step "scale of evil": "...the first one was 'not evil,' just justified homicide. Number two was crimes of passion, all the way up to 22 where there was usually a serial killer subjecting victims to prolonged torture. So, that's about as bad as it gets." (Here, he represents what Morrow suggested might be a culturally specific orientation toward this question.)

Stone's "scale of evil" focuses on ranking different types of murder, so it might not succeed at explaining evil generally. On the middle range of his scale of evil – somewhere between a justifiable or readily understandable near-accident and, on the other extreme, the callous scheming of a rogue loner – there are examples of the sort of criminal motives that should concern everyone. This includes people who live with day-to-day anger that eventually boils over; people who kill those who seem to threaten their power or to block them from doing what they want to do; people who repeatedly deceive others without remorse; and people whose crimes are sexually driven. This sort of evil is banal, to use Hannah Arendt's well-known term. It is more dangerous because it is more common, and therefore its destructive capacity is less likely to be recognized.

Stone's list gives the impression that a "psychopathic" mind is always more evil than a non-psychopathic mind. This may be true almost by definition, as Robert D. Hare's 1999 book on psychopaths is titled Without Conscience. If conscience refers to the ability to distinguish "right" from "wrong," and if psychopaths lack conscience, then psychopaths will inevitably choose to harm others without a sense of remorse – and therefore, it would be fair to call such people "evil," if indeed anyone may be called evil.

Because evil depends at least in part on a person's intentions (in addition to usually considering the actual consequences), any attempt to rank wrongdoing on a scale should consider whether the perpetrator has a conscience in the first place. Barbara Wootton worried in Social Science and Social Pathology that psychopathic motives are so inscrutable to normal people that "the psychopath may well prove to be the thin end of the wedge which will ultimately shatter the whole idea of moral responsibility," to which the philosopher Mary Midgley responded reassuringly in her essay Wickedness that "all conceptual schemes run into difficulties and paradoxes when they are used for awkward and unusual cases." Just because a scale is imperfect does not mean that it cannot be developed and used at all, on Midgley's view.

In 2009, the Australian government's Bureau of Statistics produced a list of 155 types of crime, ordered according to degrees of seriousness. Traffic offenses are at the bottom. Next comes prostitution, alcohol, gambling, trespassing, rioting, and drug use, followed by animal cruelty, incitement to hatred, and breaches of judge's orders, and then by environmental and public health violations. The top half of the list, indicating the most severe crimes, includes theft, fraud, bribery, weapons charges, drug dealing, sexual assault, vehicular homicide and murder. The list does not have legal standing, but it is intended as a tool to analyze crime. It is significant that "murder" is considered a more severe crime than "attempted murder" (here, as in most places). If "evil," as opposed to crime, is understood primarily as a matter of a person's intentions, then there should be no difference in severity between evil that has been accomplished and evil that has been merely attempted.

American forensic psychiatrist Michael Weiner has an ongoing Internet-based survey called The Depravity Project that investigates "whether any of the items under study – 26 specific intents, actions, and attitudes – can achieve consensus as to whether or not the public considers it reflective of depravity." Participants are asked "to rate whether the item is 'especially,' 'somewhat,' or 'not' depraved." In the survey's first decade, it received over 10,000 responses. The goal is to allow words like "evil," "heinous," and "depraved" to be used in a more objective fashion in courtrooms so that they reflect the nature of the crime rather than assumptions about the perpetrator as a human being.

When a religious approach is taken, the question of what is most evil is often aligned with someone's belief about what offends their God. The Catholic Church maintains two categories of sin: "mortal sins" that lead to Hell if they remain unconfessed and the less serious "venial sins."

The Inferno, a poem written by Dante in the early fourteenth century, assumed a Catholic vision of the seven deadly sins and implicitly suggested that sins could be ranked. As Dante's characters approach Hell, they first encounter dead souls who, while alive, could not quite make up their minds to be good. The crimes worsen as the characters penetrate deeper into Hell. In the First Circle, they see good people who had the misfortune to be born before the Messiah could save them. The Second through Fifth Circles contain the souls of people who were intemperate with sex, money, possessions, or in general had a bad attitude. The Sixth and Seventh Circles include religious heretics, violent people, and those who otherwise offended God. The Eighth and Ninth Circles are reserved for those who committed fraud and disloyalty.

Do people really distinguish degrees and kinds of evil? "Is evil," Morrow asked, "a great dark forest that we behold, or is it thousands of individual sprouts of wickedness, which we sort out the way a forester would differentiate among maple, spruce, oak, birch, pine, cedar, elm, hickory, hornbeam, ash, palm, gingko, acacia, fig, and so on?" And if people do not already distinguish types of evil, ought they try to do so?

It is not obvious that it is even possible to objectively rank types of evil. With its emotional and religious overtones, and with its reliance on understanding someone else's motives, the very idea of "evil" may be too personal and too blurry to pin down in a ranking chart. But even if the schema can never be completed satisfactorily, it may still be a useful exercise for anyone wishing to understand more about how different people and institutions personally interpret the severity of moral wrongs.

Posted by Tucker Lieberman at 11:37 PM