Where the Bible contradicts itself

The Bible contains numerous contradictions. People have different ways of interpreting and reacting to them, but they are indisputably contradictions.

Update: As of 2021, there's a beautiful data presentation of Bible contradictions.

The essay below was originally posted Nov. 11, 2007 to Helium Network. 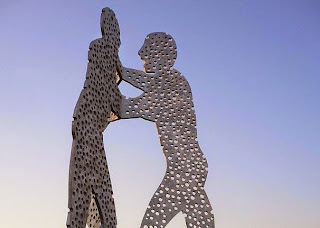 Image: Molecule Man, sculpture by Jonathan Borofsky, 1997, in Berlin, Germany. Image by: Georg Slickers. © Creative Commons Attribution-Share Alike 2.5 Generic, 2.0 Generic and 1.0 Generic license. Wikimedia Commons.
Many people throughout history, and even today, argue that the Bible is literally true and inerrant. This is impossible, as the Bible contains contradictions from beginning to end. Attempts to catalog them include, for example, Norman Geisler's "When Critics Ask".

Here is a consolidated list of some of the most significant contradictions. Please note that all direct Bible quotations are taken from the New International Version. Because modern technology allows searching the Bible by specific phrases, not every quotation here cites the chapter and verse number.

Which came first: The first man or the first plant?

A major difference between the two stories is the question of whether plants and animals predated the first human being. The chronology of Genesis 2 is admittedly convoluted in comparison to that of Genesis 1, which has opened the door to theologians who try to reconcile the two, but there is an undeniable contradiction in the two accounts on the question of whether the first man was created before the first plant.

Other stories in Genesis also tend to recur. The abduction of Sarah from her husband Abraham is retold as happening to their daughter-in-law Rebecca and their son Isaac. Lot's offering of his virgin daughters to an angry mob repeats as the deed of a different man in Judges 19. And the life stories of Joseph and Daniel, who were taken as royal servants and rose to glory because of their success at interpreting dreams, are remarkably similar.

On one possible reading, these are not "contradictions." The same events could indeed have happened twice; human history sometimes repeats itself. Alternatively, in some cases, the people who retold the stories could simply have used different names for the characters. However, for those who believe that the Bible is intended to be read as a chronologically accurate account that uses consistent names for its characters, the repetition of stories poses a problem.

The nature of God is a source of unending controversy. He is described as good, merciful, and the source of love and peace. Why, then, did God say,


"Now go, attack the Amalekites and totally destroy everything that belongs to them. Do not spare them; put to death men and women, children and infants, cattle and sheep, camels and donkeys."

Lest this one incident be explained away as a temporary lapse in God's character, it is also supposed to be true that "his love endures forever," which conflicts with the idea of God as "a warrior" who "create[s] disaster." There is an ongoing disagreement about whether God will punish children for the sins of their parents. While "I the Lord do not change," he sometimes does not carry through with his threats, and even "grieved that he had made man on the earth."

While it is claimed "no one has ever seen God," the one "whom no one has seen or can see," he has actually been sighted several times. In Exodus 33, it is said that, while God generally talked to Moses "face to face," in this particular exchange Moses was only allowed to see his back. This can be addressed by accepting that the language is metaphorical, but on a literal level, it is a contradiction.

Critically, while the Hebrew Bible (the Old Testament) insists there is only one God, nevertheless, in the creation story, the Hebrew word for divine beings is in the plural form. It matters very much whether there is one God or many gods.

Contradictions in the biographies of key characters

Some Biblical contradictions are less troubling than others. It doesn't seem to matter much whether King Solomon had four or forty thousand stalls of horses, or whether King Jehoiachin began reigning at age eight or eighteen. The first man Adam was warned that he would die if he ate from the forbidden tree, but he did so anyway and lived 930 years (Gen 2:17); perhaps God simply changed his mind and was lenient with him.

But important details in the lives of central characters call out for clarification. Did the "very humble" Moses (Num 12:3) order the wholesale slaughter of the enemy, including women and boys? Who provoked King David to take a census of the Israelites: an angry God, or Satan? And was David warned of three years of famine, or seven? (Compare II Sam 24 and I Chron 21.) How did Saul die: on David's order or by suicide, to avoid rape? Did Saul's daughter Michal die childless or did she have five sons? How did Judas die: by hanging himself or by spontaneous disembowelment?

Contradictions in the biography of Jesus

Jesus is probably the most studied case of biographical contradictions. The New Testament provides two genealogies for him. The first one, in the Gospel according to Matthew, traces the line back to Abraham, the first Jew; the second one, in the Gospel according to Luke, traces the line all the way back to Adam, the first man. Aside the difference in their scope, these lists ought to be identical. So, shouldn't we worry, as Richard Dawkins put it in "The God Delusion", that


"Matthew traces Joseph's descent from King David via twenty-eight intermediate generations, while Luke has forty-one generations? Worse, there is almost no overlap in the names on the two lists!" Even Jesus's paternal grandfather's name is in dispute. It is very strange that the line should be traced through Joseph at all, since Joseph's biological relationship to Jesus is itself a point in question: while we are told that Jesus was a descendant of David, we are also told that Jesus is his mother's "child through the Holy Spirit".

Jesus was called a wine drinker (Mat 11:19) and his first miracle was turning water into wine (John 2), yet his Apostle Paul warned people against getting "drunk on wine, which leads to debauchery." (Ephesians 5:19) Jesus famously says that a person cannot serve two masters, namely God and wealth, yet he also advises people to pay their taxes on the principle that they should "give back to Caesar what is Caesar's, and to God what is God's."

The four canonical Gospels provide contradictory reports on whether Jesus stayed with his disciples or fled to the wilderness immediately following his baptism. It is unclear whether Jesus's first sermon was given on a mountain or a plain, and what the exact text of the speech was. He engaged in fuzzy math such as "I and the Father are one" but "the Father is greater than I." The wine he was given just prior to his crucifixion may have been mixed with gall or with myrrh. His last words were "My God, my God, why have you forsaken me?"; "Father, into your hands I commit my spirit"; or "It is finished". The visitors to his empty tomb are variously reported as one Mary, two Marys, and two Marys and a Salome, and each of the four gospels has a different report of who these women saw at the tomb: one young man, two men, one angel, two angels. (Mark 16:1-8, Matthew 28:1-10, Luke 24:1-11, John 20:1-18)

Was Jesus the only man to ascend to heaven (John 3:13) or did Elijah do it too? Jesus was supposed to return from heaven within the same generation, which he apparently did not (either inside or outside the story).

If one is to read the Bible as an ethical text, the integrity of its ethical claims should be of prime concern. Why, at certain times, are people exhorted to free slaves, and at other times to take and keep them? Why do the prohibitions against killing and stealing not apply to the victimization of foreigners? Why is it forbidden to make representative art, except for the tabernacle? If people aren't supposed to taunt others as "fools," why does Jesus use that forbidden word? If everyone sins, why was Job an exception?

The Ten Commandments are given to Moses in Exodus 20. The several chapters that follow elaborate on these instructions, during which God provides highly specific regulations about slavery, capital punishment, property rights, gender, etc. Moses, in a moment of anger, smashes the tablets containing the Ten Commandments (Exodus 32:19), and God gives him new tablets which God says will be identical but actually have nothing to do with the first set (Exodus 34:1-28), having more to do with ritual than with ethics, as well as promoting ethnic cleansing.

The New Testament writers disagree whether good deeds should be proudly displayed or hidden. One says good deeds are necessary for salvation; another says faith alone is sufficient. Prayer, too, should be done openly (John 7:4) or else secretly (Mat 6:6). The righteous will either "flourish" (Ps 92:12) or "perish" (Is 57:1).

People are instructed to support their families, because "if anyone does not provide for his relatives, and especially for his immediate family, he has denied the faith and is worse than an unbeliever." And yet Jesus repeatedly tells people to leave their homes in pursuit of heaven, because "anyone who loves his son or daughter more than me is not worthy of me." Humans "must obey God rather than men" but have a contradicting obligation "to every authority instituted among men."

In one instance, Jesus teaches that people become "perfect" when they love their enemies, just as God provides sun and rain to everyone; elsewhere, he says he will destroy goodwill between people and force them to take sides, and that he will deny eternal reward to the faithless.

How much can people expect to understand?

Perhaps all of these contradictions are meant to show readers that knowledge is out of human reach. "Wisdom is supreme; therefore get wisdom," the Bible says, while warning that God will "destroy the wisdom of the wise." "The spiritual man makes judgments about all things" yet people should "judge nothing."

This raises the question: If non-contradictory, unchanging propositional knowledge cannot be obtained anywhere, why bother reading the Bible? Is the Bible to be understood purely as poetry like everything else?

The question of contradictions in the Bible also raises a larger question about human nature: Can people be trusted to self-report their own beliefs and activities? Yes, says John (8:14) — who also, tellingly, says no (5:31).