Thomas Edison: Hard work, focus and innate talent is the recipe for success

The American motivational author Orison Swett Marden, founder of Success Magazine, did not have an appointment with inventor Thomas Alva Edison when he decided to interview him in 1902. Rather, he stealthily "camped three weeks in the vicinity of Orange, N. J., awaiting the opportunity to come upon the great inventor and voice my questions."

After persistently ringing the bell at Edison's laboratory, Marden was eventually welcomed inside, where he noticed "one of the most costly and well-equipped scientific libraries in the world." (An amateur video of Edison's library, posted to the Internet in 2010, gives a sense of what Marden saw. Edison was to tell Marden, "I never was much for saving money, as money. I devoted every cent, regardless of future needs, to scientific books and materials for experiments.")

A young assistant slipped Marden's card under the door where Edison, then 55, was working. At this point in his life, Edison had about 600 patents and 300 outstanding patent applications, or so he was to tell Marden. Soon, Edison appeared in "sooty, oil-stained clothes," asking, "Want to see me?" with a smile.

The resulting interview was published as "An Inspiring Talk with Thomas Alva Edison" in 1903 by The Success Company.

Edison recounted that his family had come from Holland to America in 1730 and that he was born in Erie County, Ohio in 1847. After attempting to read through the hundreds of pages of Isaac Newton's "Principia Mathematica" when he was only eleven years old, he understandably became disinterested in mathematics. At 12, he started a newspaper, the Grand Trunk Herald, which he distributed from the Grand Trunk Railroad. He also "fitted up a small laboratory on the train" to explore chemistry, but when he broke a bottle of sulfuric acid, the conductor hit him on the ear, leaving him partially deaf for the rest of his life.

Edison learned telegraphy, taught to him by a station-master who was grateful that Edison had pulled his boy from the path of an oncoming train. The railroad then employed Edison as a telegrapher. Too imaginative for his own good, Edison modified his telegraphy machines and pulled pranks until the railroad sent him to Canada for a winter as punishment. Later, he invented a device that allowed telegraphers to pre-record their messages.

In 1869, he patented a machine that politicians could use to record votes, but as it would have prevented political minorities from filibustering, the Legislature did not want to use it. Edison learned "to be sure of the practical need of, and demand for, a machine, before expending time and energy on it." He turned instead to improve the printers relied upon by Wall Street, and he earned $40,000 for this invention.

Marden asked Edison whether his talent was inborn or developed. Edison responded that he believed inventors are born with their gift. "Some people may be perfectly familiar with a machine all their days, knowing it inefficient, and never see a way to improve it," he explained. Furthermore, he said that while his invention of the phonograph came "indirectly through accident," all others were the result of "trial after trial" and long hours of intense focus on problem-solving.

"When it is all done and is a success," he said of his work, "I can't bear the sight of it. I haven't used a telephone in ten years, and I would go out of my way any day to miss an incandescent light." 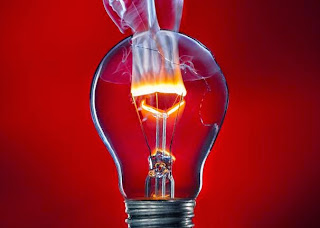 
The interview was probably conducted shortly before the famous incident in early 1903 in which Edison publicly electrocuted a cantankerous zoo elephant on Coney Island in an attempt to demonstrate the dangers of alternating current. Edison's electrical patents were based on the use of direct current, while fellow scientists Westinghouse and Tesla promoted alternating current. This ongoing feud was not mentioned in the interview.

Marden capped the book with a series of quotations on the topic of success. This short, informal interview is engaging and provides insight into a brilliant mind that changed the world.

Posted by Tucker Lieberman at 7:01 PM