For states, talking to rogue militants is a difficult choice

When a person is abducted and held hostage for ransom, or when a building or entire region is threatened with destruction, it can be tempting for would-be heroes to negotiate with the terrorists and comply with their demands to ensure that their civilian targets remain unharmed. One naturally wants to "talk down" an unstable person from committing rash acts, and thereby to save the day. However, that sort of unforeseeable opportunity for heroism should be distinguished from carefully planned, long-range negotiations. When a state knows that certain people are likely to commit crimes in the future, the state may choose various approaches in its interactions with them.

This article was originally posted to Helium Network on July 9, 2006.

In the heat of the moment, saving the innocent at all costs – even by paying high ransoms, for example – may seem like the only moral thing to do. However, such altruism comes at a steep price. The payment conceded to one terrorist group may encourage others to extort similar concessions by the use of similar criminal acts. In other words, terrorists will learn that "crime pays." Saving one person's life by paying a ransom may therefore contribute to the abduction of ten more people in the future.

Furthermore, while an individual might be expected to quickly cave into the demands of a criminal, a government is expected to have sufficient military backing to stand firm in its positions even in the face of substantial pressure and threat of violence. A government that quickly retreats from a standoff with a small group of people may be perceived by other nations as weak, insecure, or incompetent. This may harm its foreign relations and future negotiations of all kinds.

A state has no need to negotiate with significantly weaker, more vulnerable terrorists – for example, lone, crazed gunmen or isolated cults. And although more threatening terrorist groups, such as organized militia, might actually rival the government's power, the government may still believe it is better off projecting an air of confidence and assuming that the militia will not call its bluff.

Refusing to talk to the enemy is a rational approach when one is certain one will win in the end. Of course, depending on the enemy's strength and influence, there is often a real possibility that the state could lose the battle, either militarily or ideologically, or at least not decisively win the battle through eradicating the enemy's presence. In that case, the state needs to consider how it can continue to thrive in a world where the enemy exists. That may involve talking to the enemy. 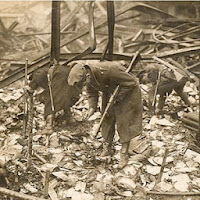 Image: Irish National Army soldiers sort through a post office destroyed by arson in Dublin. Image taken Nov. 5, 1922 and published in the Irish Times the next day. © No known copyright restrictions. National Library of Ireland on the Commons.

As Mitchell B. Reiss put it in Negotiating with Evil: When to Talk to Terrorists: "While there is no guarantee that talking to enemy states will promote a country's national interests, there is likewise no guarantee that not talking will do so. Not talking may be simply the stubborn residue of a failed policy. Some states cannot be isolated internationally, defeated militarily, or overthrown by domestic political forces. Keeping diplomatic distance from odious regimes may therefore not achieve a state's foreign policy objectives." Before Reiss wrote his book, he spoke to "elected officials, career civil servants, senior intelligence agents, military officers, and counterterrorism experts" who somehow managed to hold "two conflicting thoughts: Terrorists are evil and they may be part of the solution."

If the government knows that its population is at the mercy of a terrorist group distinctly more powerful than itself – for example, a group with multiple nuclear weapons – it may be more advantageous for the government and for the people it serves to engage in formal negotiations to deflect a major threat.

It makes a difference whether the situation is likely to repeat. This is illustrated through a well-known psychological exercise called the Prisoner's Dilemma, in which two people are put in separate rooms and given an opportunity to betray each other for possible gain. Betraying (called "defecting" within this exercise) is more likely to bring personal gain, and it has been deemed more "rational" insofar as rationality has traditionally been equated with greed that disregards obligations to others. However, if there are multiple iterations of the choice to cooperate or defect, and one does not know when these iterations will end – in other words, if the exercise is like real life, and people are in relationships of indefinite duration – it is risky to betray one's partner because the partner can easily return the injury on the next iteration. The same can apply to parties in long-term political negotiations.

Former U.S. Secretary of State Madeleine Albright addressed the question of how foreign policy can balance "practical" and "moral" obligations in her book The Mighty and the Almighty. The very idea of what it means for morality to be impractical or irrational is a separate, thorny question, but one that nevertheless affects political negotiations. Negotiators often feel they must balance "playing nice" or "being kind" with a set of aggressive, self-serving national goals. This is part of what makes negotiations so difficult.

Lastly, there is the simple question of how a state is certain that it is pursuing the right goals. Subjectively, people often feel it to be obvious that, if one has been victimized by terrorists, then naturally any response that happens to be desired is also morally justified and will have valuable results. But some people, including some victims of terrorism, have criticized this attitude as irrational and harmful. Nikki Stern, whose husband died in the terrorist attack on Sept. 11, 2001, wrote in Because I Say So: The Dangerous Appeal of Moral Authority that individuals and governments need to beware of the idea that they are invested with infallible moral clarity that exempts them from having to provide justification for their beliefs and demands. Being the victim of terrorism is a painful experience, but pain does not confer "any sort of grief-related moral wisdom" and "it certainly doesn't confer expertise." When one incorrectly assumes that one has wisdom or expertise, it can lead to dangerous choices. She noted that "people who believe themselves in possession of the truth tend to believe they're also in possession of the moral authority to act on it."

Stern concluded that nations set the best example of moral leadership when they "pursue truth, justice, and fairness to the best of [their] ability while remaining aware of [their] fallibility." This is a wise reminder of humility for anyone who is tasked with confronting a terrible force.

Posted by Tucker Lieberman at 8:51 AM