A look at the life of Chinua Achebe, author of 'Things Fall Apart'

The famous Nigerian novelist Chinua Achebe died on March 22, 2013, in a hospital in Boston, Mass., at age 82 after an illness. 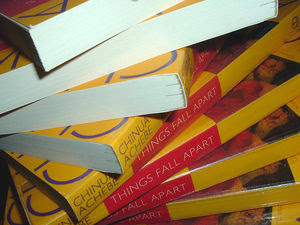 "Achebe had not only put Nigeria on the world's literary map through his inimitable literary works, but had also fought for good governance and a better Nigerian society via his essays, trenchant criticisms and actions," ran an article in P. M. News Nigeria. The article explained that Chinua's work "infuses the English language with inflections and a history that is uniquely Igbo, discernibly Nigerian and unarguably African."

Achebe grew up reading British classics and was nicknamed "Dictionary" by his friends, according to an obituary in The Economist. However, he questioned the Europeans' depiction of Africa. Having developed the opinion that, as Philip Gourevitch put it for the New Yorker, "the Empire's claim that Africans had no history was a violent, if at times ignorant or unconscious, counter-factual effort to annihilate the history of his continent's peoples," as a young man, he began to question colonialist assumptions in his writing. He switched the focus of his studies from medicine to literature. It was an auspicious choice, as he was to become one of the world's most significant literary figures.

The handwritten manuscript of his first novel, Things Fall Apart (1958), languished for months at an English typing agency because it was perceived as a joke. When it was finally typed and published, it caused a sensation. The novel features a Nigerian man of Igbo ethnicity who becomes wealthy by traditional standards, yet is troubled by European colonialism. The novel has been in print continuously for over a half-century and has sold millions of copies. Kwame Anthony Appiah, quoted in The Week (April 5, 2013), said of its influence on African writers, "It would be like asking how Shakespeare influenced English writers or Pushkin influenced Russians."

Nigeria gained independence from Britain in 1960, when Achebe was nearly 30 years old. Although Achebe taught in the United States and wrote in English, his literature continued to grapple with Nigeria's descent into war and military rule. He saw literature as a tool to inspire people and to confront the existing order. His fourth novel, A Man of the People (1966), prompted the government to attempt to arrest him as a conspirator, but he escaped to England with his family and lived there for several years.

In 1977, he published a famous essay about Joseph Conrad's Heart of Darkness in the Massachusetts Review, complaining that it was emblematic of a dehumanization of Africans endemic throughout literature. (The essay can be found today in the Norton Critical Edition of Heart of Darkness.)

Two decades after a novel nearly cost him his life, he resumed his career as a novelist with Anthills of the Savannah (1987). A car accident in 1990 left him paralyzed from the waist down, but he was able to continue his career as a teacher. His final book was There Was A Country: A Personal Memoir Of Biafra (2012).

"One measure of his influence," the Economist wrote, "is that contemporary African literature is now taught throughout America, where it was once thought marginal." People all over the world, whether they have read his books or not, continue to benefit from his voice.

Posted by Tucker Lieberman at 9:02 PM