What you can learn about capital punishment from 'ExecutedToday.com'

'ExecutedToday.com' is a blog that provides thorough, detailed information about executions throughout history and all over the globe. This article was originally posted to Helium Network on Dec. 16, 2013. 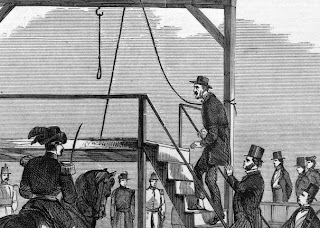 The blog "ExecutedToday.com" features a daily post of an execution corresponding to "this day in history." Undeniably, this is a macabre approach to learning history, but for some readers, it will be absorbing and effective. The writing is highly literate and contains deliciously obscure vocabulary.

The executions are usefully organized by category. For example, Agnes Bernauer (executed Oct. 12, 1435 for witchcraft) can be found under the category "Wrongful execution," and Udilberto Vasquez Bautista (executed Sept. 11, 1970 for rape and murder) can be found under the category "Popular culture." The latter is famous as a "folk saint" in Peru among those who consider him innocent, and he is the subject of the film "Milagroso Udilberto Vasquez."

The executions are also searchable by location, method (e.g. "Blown from Cannon" or "Lingchi," the Chinese practice of slow dismemberment in public) or the date on which the stories were posted to the blog. A few of the featured executions, such as a 1942 photo of Nazis executing the resistance in Belarus, occurred on uncertain date; the author has included cases such as these to avoid focusing prejudicially only on famous, better documented cases where dates are known.

The blog's "About" page provides a lengthy description of intent. The author acknowledges that, while "this is not an all-purpose chronicle of human cruelty," the definition of an execution - a killing by the state - can be debated. Also, while the author admits to opposing the death penalty, the blog is not ideological and aims simply to illuminate "the perspective on humanity we gain through the window of this human institution."

There are a variety of reasons why someone might be interested in reading the blog: if not for the prurient interest in violence, then for a desire to learn about political, military and religious history or about judicial approaches to criminal cases. While not pornographic, neither is it quite "safe for work," unless one works in the sort of environment where it is normal to look at photos of naked victims huddled at the edge of mass graves. If an occasional visit to the website does not satiate one's appetite, the dedicated reader may subscribe by email, RSS or Twitter.

With well over 2,000 posts, this is an extremely thorough collection, as it seems to consist of daily posts that began in 2007 and are still accumulating as of 2013. There is certainly a niche readership for this, and it may be of use to scholars. Dirk C. Gibson cited the blog in his book "Legends, Monsters, or Serial Murderers?", as did William Webb in his book on Japanese serial killers, "Murder Under the Rising Sun." The library of Stetson University's College of Law posted a review in 2011 recommending the site, saying it was "written with great detail and care."

The readers of "ExecutedToday.com" are permitted to leave public comments or to send a private message to the author. (It may come as no great surprise, given the visceral impact of the material and the controversial subject matter, that the author chooses to remain anonymous.) The blog has featured "guest posts" written by others, and the author of "ExecutedToday.com" has in turn guest-posted on other blogs, such as "Murder by Gaslight." The blog is a useful and growing contribution to the body of knowledge on the Internet.

Posted by Tucker Lieberman at 3:30 PM