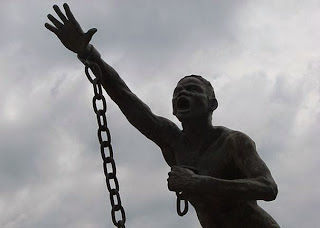 Quobnah Ottobah Cugoano grew up alongside the children of a king of Fantee in present-day Ghana. When he was 13, in the year 1770, he and the children were kidnapped in the woods by other Africans and sold to a European slave ship. He was unable to convince anyone to send word to his family. Finding that "death was more preferable than life," the captive women and children - while the men were chained beneath the deck - conspired to burn the ship and perish together, but one of the women betrayed their plan.

Cugoano was taken to the West Indies (that is, the Caribbean) before being sold to a master in England in 1772. Coincidentally, this was the same year that Lord Mansfield issued his famous ruling that prohibited slave-owners from pursuing their slaves who had escaped to other countries; this was commonly understood as the de facto abolition of slavery in England, 75 years after parliament had allowed private merchants to slave-trade on the west coast of Africa for a fee of ten pounds. It is not known how Cugoano eventually became a free man, but a decade after his arrival in England, he was working as a servant and was an abolitionist. Having been baptized with the name John Stewart, he came to accept Christianity as the one true religion.

His book, "Thoughts and Sentiments on the Evil of Slavery," was published in 1787, when he was about 30 years old. A revised version was published four years later.

In this book, Cugoano acknowledges that there were slaves in Africa, too, but says they were primarily prisoners of war or people who owed a debt and were treated relatively well. The same applies to slavery in ancient times. He thinks it may be possible to allow "a free, voluntary, and sociable servitude, which is the very basis of human society, either civil or religious, whereby we serve one another that we may be served, or do good that good may be done unto us, [which] is in all things requisite and agreeable to all law and justice." On his view, slavery may also be used as a punishment for lawbreakers.

He contrasts this ideal with the reality of slavery in the contemporary West Indies where "hard-hearted overseers have neither regard to the laws of God, nor the life of their fellow-men." Slaves are stripped and stared at, stowed like cattle in a stinking ship-hold, sold and separated from family forever. Cugoano personally witnessed a fellow slave in Grenada whipped for choosing to attend church rather than continue laboring in the field. He also refers to a well-known incident in 1780, where a captain threw over a hundred ailing slaves overboard because he preferred to attempt to recover their market value from his insurer.

He decries this modern type of slavery as "an evil of the first magnitude" that finds no justification in the Bible and is "contrary to all the genuine principles of Christianity." He lauded the writings of other abolitionists who describe how slavery is "to the great shame and disgrace of all Christian nations wherever it is admitted in any of their territories."

He proposes "days of mourning and fasting" for repentance, followed by "a total abolition of slavery" throughout Europe, to be enforced by warships sent to the African coast to ensure that emigrants are leaving voluntarily. During the transitional period, he recommends a lighter form of servitude for Afro-Britons: they should be freed, he says, after seven years of service which will compensate their keepers for the cost of their Christian education, and they should be released from their service only if they have become morally upright Christians, after which they should be compensated for their continued service or else they may elect to return to Africa to serve as Christian missionaries.

Cugoano explicitly rejects the European pro-slavery claims that African society is so terrible that its members consent to slavery as an improvement, and that slavery may be assumed to be harmless simply because other Europeans practice it. He also rejects the claim that dark skin is the curse from God known as the "mark of Cain" in the Bible. "The life of a black man is of as much regard in the sight of God, as the life of any other man," he writes.

Rather, violent imperialists and slave traders aren't truly Christian, but are part of the "synagogue of Satan" and the "Antichrist." He warns that breaking Biblical law by enslaving others will result in an eventual "awful visitation of the righteous judgment of God" which will be no less severe for its belatedness, perhaps manifesting in hurricanes, crop failures, national debt and individual poverty. As an economic strategy, freedom for all people would enable more national prosperity than would the keeping of a slave class.

"the voice of our complaint implies a vengeance ... and if it is not hearkened unto, it may yet arise with a louder voice, as the rolling thunder ... not only to shake the leaves of the most stout in heart, but to rend the mountains before them, and to cleave in pieces the rocks under them, and to go on with fury to smite the stoutest oaks in the forest"!

Posted by Tucker Lieberman at 12:31 PM