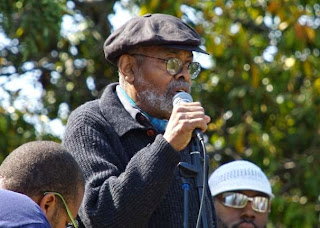 Amiri Baraka, an accomplished poet and playwright, died on Jan. 9, 2014 in Newark, N.J. He was active with organizations devoted to Black empowerment. This article was originally posted to Helium Network on Jan. 10, 2014.

Amiri Baraka, 79, an accomplished poet and playwright, died on Jan. 9, 2014 at a hospital in Newark, N.J., the city of his birth. He was a passionate defender of the integrity and authenticity of African-American art.

His given name at birth was Everett Leroy Jones. He published many works, including the acclaimed play "Dutchman," under the name LeRoi Jones.

One of his most influential essays, "The Myth of a 'Negro Literature,'" published in 1962, can be read today in "Home: Social Essays." In the essay, he argued that, as Kaluma ya Salaam paraphrased it,

"as long as the Negro writer was obsessed with being accepted, [and with being] middle class, he would never be able to 'tell it like it is,' and, thus, would always be a failure, because America made room only for white obfuscators, not black ones."

In the early 1960s, LeRoi Jones was developing as a beat poet in Greenwich Village in New York City. He and his wife, Hettie Cohen, worked on a literary magazine together. However, the murder of Malcolm X on Feb. 21, 1965 was a turning point in his consciousness. Leaving behind his children and his wife - their marriage had lasted from 1958-1965 - he and a group of committed artists moved to Harlem to form the Black Arts movement, related in spirit to the Black Power movement. in 1967, he married Sylvia Robinson. The next year, the couple converted to Islam, as Malcolm X had done, and changed their names. His wife became known as Amina Baraka; he chose "the Bantuized Arabic name Imamu Ameer Baraka, later changed to Amiri Baraka."

An article posted by the Academy of American Poets explains the widespread influence of the Black Arts movement:

"Sometimes criticized as misogynist, homophobic, anti-Semitic, and racially exclusive, the Black Arts movement is also credited with motivating a new generation of poets, writers and artists. In recent years, however, many other writers - Native Americans, Latinos/as, gays and lesbians, and younger generations of African Americans, for instance - have acknowledged their debt to the Black Arts movement."

Among the familiar names whose poetry was part of this movement are Nikki Giovanni and Eldridge Cleaver.

In the 1970s, Amiri Baraka remained active with organizations devoted to Black empowerment; his work began to lean more toward Marxist and Leninist politics, drifting away from his former beliefs about Black nationalism. In 1984, he published his autobiography.

In 2002, he became the state poet laureate of New Jersey. He quickly lost the post after performing a poetic indictment of violence, "Somebody Blew Up America," which asked "Who told 4,000 Israeli workers at the Twin Towers / to stay home that day". The lines implied that there was conspiratorial foreknowledge among Jews regarding the terrorist attacks of Sept. 11, 2001 that destroyed the Twin Towers and killed nearly 3,000 people in their office buildings on a Tuesday morning, and that these Jews had only protected their own kind. (The claim is, of course, false. It was likely based on a reported Israeli government estimate that 4,000 Israelis were in the vicinity when the towers collapsed. Several hundred Jews died in the event.)

With Amiri Baraka's passing, poets count the loss of a literary star, in the sense that he wrote about stars in his poem "Preface to a Twenty Volume Suicide Note":

Posted by Tucker Lieberman at 4:01 PM