Shalmaneser III ruled Assyria from 858-824 BCE, expanding his empire through military campaigns. He ruled from the capital city Nimrud – once known as Calah or Kalhu, which was near Nineveh – in present-day Iraq. He is mentioned in the Hebrew Bible in 2 Kings 17:3 and 18:9. His name honors the god Shulmanu, a war god who was the Assyrian equivalent of the Mesopotamian god Ninurta.

What remains of Shalmaneser III's palatial grounds, the place where the old, wealthy, powerful king lived out his retirement, is today a valuable archaeological site. A fire-damaged underground complex made of glass-glazed brick on a sprawling 60-acre site was discovered by Austen Henry Layard in 1845. M. E. L. Mallowan discovered a nearby 18-acre military site in 1959. Known as "Fort Shalmaneser," it yielded carved ivories, plaques, and pottery, according to an article on the "Archaeology of Mesopotamia" in the International Standard Bible Encyclopedia. 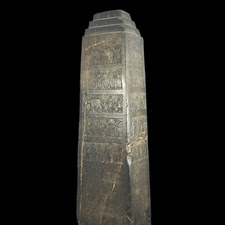 Image: The black obelisk of Shalmaneser III. © Trustees of the British Museum. Used here for a non-commercial purpose according to the British Museum's Terms of Use. Image identification: ME 118885, AN32487001.

Shalmaneser III's famous obelisk, erected a year before his death during a civil war sparked by his feuding sons, is six-and-a-half feet tall and made of black limestone. Twenty reliefs and about 200 lines of cuneiform script depict five conquered kings paying tribute, for each of which there is a four-relief sequence that wraps around the sides of the obelisk, thereby totaling the twenty reliefs. As one author explained: "From top to bottom [the conquered kings] are: (1) Sua of Gilzanu (in north-west Iran), (2) Jehu of Bit Omri (ancient northern Israel), (3) an unnamed ruler of Musri (probably Egypt), (4) Marduk-apil-usur of Suhi (middle Euphrates, Syria and Iraq), and (5) Qalparunda of Patin (Antakya region of Turkey)."

The Black Obelisk was recovered by Layard from the ruins of Nimrud and is kept today at the British Museum. In late 1845, Layard, who had developed an archaeological curiosity about the mysterious mounds in the Iraqi desert, traveled to Iraq with the backing of Sir Stratford Canning. He lied to the fearsome governor of Mosul – the one-eyed, one-eared Mohammed Pasha, known as Keritli Oglu – that he had traveled to Mosul only to hunt boars. Layard's party then rafted on the Tigris River toward Nimrud where they began digging up a large mound strewn with pottery fragments. Mohammed Pasha was soon replaced by Hafiz Pasha and then by Tahyar Pasha who, while spending three days admiring Layard's site, referred to sphinx images as "the sacred emblem of which True Believers speak with reverence". After a year of excavation, one of Layard's workers made the most significant find, the Black Obelisk, which was shipped to England in December 1846. Although Layard had hired local protection, due to political instability in the fraying Ottoman Empire he left the area soon afterward.

In a lengthy account based on the writings of Layard himself, one of his contemporaries, an assistant at the British Museum, described the obelisk:

"The whole inscription was in excellent preservation; scarcely a single character was wanting, and the figures were sharp and well defined. The king is twice represented, followed by his attendants, a prisoner at his feet, and his vizir and eunuchs are introducing to him a procession consisting of various animals, and of figures carrying vases and other objects of tribute on their shoulders, or in their hands. The animals are the elephant, the rhinoceros, the Bactrian or two-humped camel, the wild bull, the lion, the stag, and various kinds of monkeys."

The inscription attributes the gift of the Asian elephant to the ruler of Musri, according to Ancient Mesopotamian Materials and Industries.

Shalmaneser III's Black Obelisk is seen as significant by those interested in Biblical history since one of the kings paying him tribute, Jehu, is also mentioned by name in the Bible. Some people therefore take the Black Obelisk as evidence that "the Bible’s stories are true, they really happened, and the biblical record is accurate." According to Richard Rives' religiously motivated book Too Long in the Sun, the obelisk's inscription also mentions the names of many Assyrian gods including Assur, Anu, Bel, Ea, Sin, Adad, Shamash, Merodach, Adar, Nergal, Jusku, Beltis, Bel, and Ishtar.

Posted by Tucker Lieberman at 9:41 PM