Dangers of seduction: 'The Power of Sympathy' by William Hill Brown

A plot summary of the late 18th-century book "The Power of Sympathy," which may be considered the first American novel.

William Hill Brown’s late 18th-century book "The Power of Sympathy" is widely considered as the first American novel. Primarily written to convey moral opinions, it is not as plot-driven as modern novels, but it does offer a plot twist.

In a short preface, the author complains that “ladies” eagerly read novels that all too frequently lack any moral message. He announces that he has written a story in which “the dangerous consequences of seduction are exposed, and the advantages of female education set forth and recommended.”

Written entirely in epistolary format — that is, as letters exchanged as correspondence between characters — the story opens with a young man, surnamed Harrington, who declares himself passionately in love with a girl named Harriot. His father is opposed to his “early marriage,” so the pair resolve to marry privately.

The first part of the book contains a good deal of sermonizing on the subject of what girls and women ought to read. In selecting a book for a young teenager, Harrington's friend Worthy says that “unless a proper selection is made, one would do better never to read at all.” The elder Harrington, the protagonist’s father, then declares that “our female libraries are overrun” with novels that are “not regulated on the chaste principles of true friendship, rational love, and connubial duty, [which] appear to me totally unfit to form the minds of women, of friends, or of wives.” This lengthy digression is important to understanding the author’s intentions behind writing this book, but it does not advance the plot. 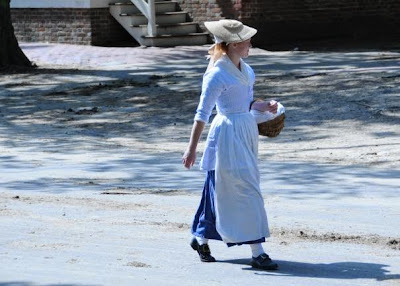 After this exchange, Harriot travels from Boston to Rhode Island. Her host, Mrs. Martin, is pensive and sad upon her arrival, because it has been revealed that her sister, Ophelia, had an affair with Mr. Martin. Ophelia retired to the country and gave birth to “a child, at once the son and nephew of Martin.” When Ophelia’s enraged father tried to force a family confrontation, the culpable sister drank poison.

After hearing this tale, Harriot’s friend Myra Harrington (her fiance's sister) replies, gasping, “Surely there is no human vice of so black a die, so fatal in its consequences — or which causes a more general calamity — than that of seducing a female from the path of honour.”

Worthy is the next to share a story of a wayward woman. He heard a despairing girl, Fidelia, singing in the woods; her intended husband drowned himself after she “was carried off by a ruffian.” Worthy avers, “Seduction is a crime that nothing can be said to palliate or excuse.”

Meanwhile, as the young Harrington continues to plan his hasty marriage to Harriot, his sister Myra warns him repeatedly: “Better not marry her.” Her warning is vague, and it seems she is not quite sure why she feels that way. “I give no heed to it,” Harrington says of her warning, “and yet why should it affect me in this manner?”

In a digression, Harrington speaks to a female slave who bears the scar of a whip on her shoulder, a lash for which she volunteered in place of her child. Harrington congratulates her with a blessing:

“May he whom you call the best of beings continue you in the same sentiments...Then shalt thou feel every circumstance of thy life afford thee satisfaction...All thy labors will become easy — all thy burdens light, and the yoke of slavery will never gall thy neck.”

Although, to modern ears, this sounds presumptuous and patronizing to the extreme, the author doesn't seem to have intended to paint Harrington as a fool or a pro-slavery advocate, but rather as a romantic swept away by the force of sentiment. Even others’ bondage seems a noble condition to a man so in love with his divine Harriot.

A friend then gives Myra justification for her concerns: Harriot is a Harrington, too, by blood. The elder Harrington secretly fathered Harriot with a woman named Maria. This Harriot who plans to marry into their family is, in fact, already their sibling.

The tale of the long-gone Maria is the novel’s third example of a seduced woman who met an ignominious fate. “Melancholy and guilt transfix her heart, and she sighs out her miserable existence,” the friend remembers Maria. Having born a child out of wedlock, Maria welcomed death, since her life was “no longer a blessing to its possessor, or a joy to those around her.”

Mr. Harrington, for his part, chimes in to accept some responsibility for impregnating Maria. “The picture you have exhibited of a ruined female is undoubtedly just, but that the rude spoiler has his share of remorse is equally so,” he says.

Upon learning that his son intends to privately marry Harriot, he has no more time to waste in reflection on past sins. “I fly to prevent incest,” he announces. He cannot bring himself to tell his son that his beloved Harriot is his sister, so he enlists a friend to break the news.

The younger Harrington and his Harriot are both distraught by the revelation. Having already fallen in love, passionately if chastely, they cannot manage to think of themselves as brother and sister. Harriot perishes from stress and grief, and Harrington then takes his life with a pistol, leaving a long suicide note and a copy of Goethe’s "The Sorrows of Werter." "My heart presaged it," his friend Worthy intones.

Unlike the other negative examples in the novel, the couple’s deaths do not seem to be a punishment for their own sexual transgression. They did not transgress. Rather, their deaths may be interpreted as a punishment for the transgression of their father and of Harriot’s mother. The intended lesson seems to be that seduction, infidelity, and births out of wedlock bear consequences for successive generations.

Modern readers will likely find the format of this story a little unusual. It is a morality play told through letters. While it begins slowly and pedantically, the plot thickens in the second half and makes the antiquated message more entertaining to read.

Posted by Tucker Lieberman at 9:06 PM