Unreadable and mysterious written language: A look at ancient languages that still haven't been deciphered

Some scripts have not been deciphered. Some are so mysterious, it isn't even known what language they were used to transcribe. Originally posted to Helium Network on Aug. 27, 2010.

Among the greatest puzzles in the world are the undeciphered scripts - ancient systems of writing that no one has yet been able to learn to read. In many cases, it is not even known what language is represented by such strange symbols. They are like secret codes that no human or computer has yet been able to crack. We can only wonder what mysteries of ancient life are locked behind them.
Here is a brief overview of a few randomly selected undeciphered scripts, organized from oldest to newest.

This was a pictogram system used in southeastern Europe from 6000-4500 B.C.E. Short inscriptions have been found on burial sites.

Used in the region of present-day Pakistan between 2600-1900 B.C.E. Although there are thousands of examples of this script, no one has cracked it. It may have represented a Dravidian or Indo-Iranian language. About 500 distinct symbols are known, yet the longest surviving example strings only seventeen of them together.

Used in Greece around 1800 B.C.E., it is related to hieroglyphics and uses relatively few symbols. (Linear B was once also a mystery but it proved to be a Cretan form of Greek.)

Today the Tujia are a Chinese ethnic minority who trace their heritage back to the Ba kingdom (600-316 BCE). Their spoken language is in the Tibeto-Burman family. They were long believed never to have had a written language, but several ancient books discovered in Youyang County in 2008 use a script that resembles Chinese characters and may be Tujia.

The Etruscans lived in Italy around 600 BCE. Scholars are able to pronounce Etruscan words, and the "bi-texts" combining Etruscan with Latin or Greek have enabled guesses about its meaning. According to one writer, "Etruscan, as scholars know it, cannot simply be classified as belonging to the Caucasian, the Anatolian, or Indo-European languages such as Greek and Latin, from which it seems to differ markedly in structure." It has no surviving descendant languages. While Etruscan texts can be read for general meaning, the precise connotations of their words and grammar remains a mystery.

This system was used in southern Mexico from 500 B.C.E.-1000 C.E. Most inscriptions are less than 10 symbols and, although modern forms of Zapotec are still spoken today, the ancient language has been lost.

Dating to 300 BCE in the Sudan, Meroitic is the second-oldest writing system in Africa. One Meroitic script is an adaptation of Egypt's hieroglyphics (which is the oldest African writing system), while another is a 23-symbol alphabet including vowel sounds and a sign to divide words. The existence of this script was unknown in Europe until the 19th century. Today, these inscriptions can be decoded, but it is unknown what language they represent.

The Runic alphabet, often called "futhark," was used throughout Europe for magical inscriptions as early as the 1st century CE and especially during medieval times. Some people believe that it was created artificially rather than having evolved on its own. It may have been modeled on the Roman or Etruscan alphabet. The word "rune" means something akin to "text" in Old Norse and "mystery" in Old Germanic.

Also known as Mojarra or Epi-Olmec, it was used in Central America from about 500 BCE-500 CE. The glyphs are elaborate boxes and crosses. The language is unknown.

The Picts lived in present-day Scotland in the 4th-9th centuries C.E. They inscribed symbols on stones, and no one knows whether this may have been a form of writing rather than art.

This extinct language was used in Khazaria - the present-day region of Caucas, Armenia, northeastern Turkey and part of Russia - whose kingdom that lasted from 652-1016 C.E. It was related to other Caucas languages and used a slightly different alphabet.

Modern Nahuatl dialects are spoken by two million indigenous Mexicans, but Classical Nahuatl, spoken by the Aztecs when the Spaniards arrived in the 16th century C.E., is now extinct and its glyphs have not been decoded.

There is only one existing example from Central Europe, c. 1600 C.E. The hauntingly illustrated Voynich manuscript, named after the collector who acquired it in 1912, has never been deciphered. Many people believe the manuscript was created as a hoax. 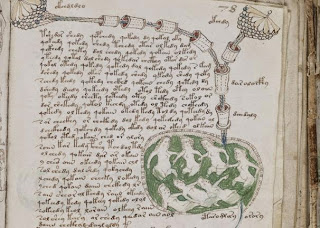 Used on Easter Island, c. 1800 C.E. This script probably represented the Polynesian language Rapa Nui, but no one remembers how to read it.

These are just a few of the mysteries of ancient writing. Some of them may be solved one day. Others may rest in permanent darkness.

Computers may be able to crack the codes. A 2019 update: Jiaming Luo and Regina Barzilay from MIT and Yuan Cao from Google’s AI lab in Mountain View, Calif. developed a computer system that correctly translated two-thirds of Linear B cognates into Greek. Linear B was a test case because humans had already deciphered it. Given that the computer can correctly decipher Linear B, it may be able to crack the code of other scripts.

Posted by Tucker Lieberman at 10:12 AM

Etruscan writing can be easily understood completely, scholars know this but they keep it from the public for what it discloses. Sadly this is true for many ancient texts. There are those who are who they are because of this deeply suppressed knowledge. People can only be as learned as they are told regardless of the depth in which one immerses themselves.