Jordan Peterson on gender quotas in politics (article in the National Post, Dec. 11, 2018)

Jordan Peterson published an opinion piece, "The gender scandal – in Scandinavia and Canada," in Canada's National Post on Dec. 11, 2018.

Focusing on just one or two of my points of disagreement, I sent this letter to the newspaper, which they published in their Dec. 18 issue. Here's a blurry image of the paper... 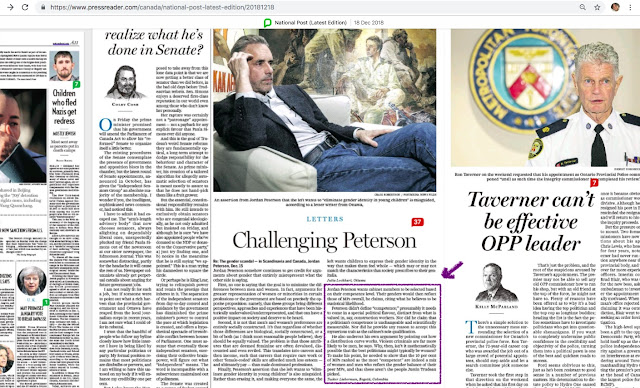 ...and a transcript of my letter.

"Jordan Peterson wants Cabinet members to be selected based on their competence level. Their genders would then reflect those of the MPs overall, he claims, citing what he believes to be statistical likelihood.

Peterson didn’t define “competence;” presumably it needs to come in a special political flavor, distinct from what is valued in, say, construction workers. Nor did he claim that a politician's competence is unchangeable and scientifically measurable. Nor did he provide any reason to accept this mysterious trait as the Cabinet's sole qualification.

He also undercut his own argument by pointing out how a distribution curve works. Violent criminals are far more likely to be men, he says. Why, then, isn't it mathematically possible that the best politicians might typically be women?

To make his point, he needed to show that the 10 percent of MPs ranked as the most 'competent' are indeed a mix of women and men who reflect the gender balance of their peer MPs, and that these aren’t the people Justin Trudeau picked."

In the online comments, one reader accused me of playing at being "deliberately obtuse" in my failure to understand what ought to be the "obvious" definition of political competence. (I don't think it's obvious at all, and if I am obtuse, it is surely accidental.) This reader also accused me of being sarcastic (nothing in my letter is sarcastic) and of having "cherry-picked" my responses (well, yes, when the original opinion article is 2,100 words and my response can only be about 8 percent as long, I have to drastically limit what I respond to). Another reader complained that there's no way to rank MPs by their competence level. (Yes; that's exactly my point. Peterson didn't define what he means by competence; we don't know if this unnamed trait is scientifically measurable; and, without ranking each MP's competence level, he can't prove his point.)

My letter to the editor was only about 165 words due to the length restrictions. If I'd had more space, I could have made many more points about Peterson's article.

To begin with, Peterson's tone is full of dismissive snark. He uses phrases like “Game over” and “Get it?” to provoke debate with the “neo-Marxist leftist postmodern” “politically correct” “utopians” who are “radically and loudly insist[ing]” things for reasons like because it's 2015 and who, he says, are "appalling" and "wrong." This language is not informational. It is just off-putting.

I was most interested in "Part Two (Canada)," which I perceive as the main argument toward which Part One builds. Part Two has the following flaws.

First, he proposes the possibility that “competence is the most important factor” for anyone who works in federal government, then assumes this to be true. He does not even define what he means by competence, though he mentions it in the same breath with “intelligence” and “conscientiousness” (whether to identify it with those virtues or to distinguish it from them, I can’t tell). Let me suggest another important trait for politicians: personal experience that matches their constituents'. For example, when the government sets policy about maternity leave, it is good if many of the decision-makers have themselves previously given birth, because that is a relevant life experience that allows them to readily understand the issues. Abstract forms of intelligence/conscientiousness/competence do not substitute for that life experience. For similar reasons, maturity and career experience are valuable in politicians. Many 20-year-olds are highly "competent" but they aren't quite ready for political leadership. So I don’t accept Peterson’s assumption that “competence is the most important factor” in politicians.

It is especially nonsense since the first half of the article—“Part One (Scandinavia)”—discusses how men and women self-report different personality traits. Statistically, “men are less agreeable,” Peterson reports, while women are “more interested...in people.” It seems to me that being people-oriented, sympathetic, and motivated to reach agreement are great assets in a politician. Rearranging the elements of his own argument could result in the very different proposal that women make better politicians.

To use a visual illustration more common to a math class: Imagine you want to select a handful of the highest-quality M&Ms from a bag. Before you begin your selection process, someone throws out all the blue ones. Does it matter? It shouldn't, because for your practical purposes, all the M&Ms taste the same anyway. They are all adequate for the purpose of being eaten. But suppose there really is a quality difference, and what if all the blue ones are inferior—"less agreeable" to you? Then it doesn't matter if they were thrown out. In fact, it speeds up your task because you don't have to waste time on them. I am not comparing humans to M&Ms I am using M&Ms as a mathematical illustration to remove some of the feeling and assumptions. And I am not saying that male politicians are inferior to female politicians; I am pointing out that Jordan Peterson made a comment that suggested that they might be, which undercuts his argument because, if it were true, it would affect the mathematical outcome.

He makes an attempt to explain distribution curves. He says: When comparing any randomly selected man and woman, the more “aggressive” individual is probably the man, but not always. The chance of it being the man is only 60%-40%. Which is to say that most humans are not especially aggressive at all. There are some outliers, though—violent criminals—and these are nearly always men. Since he realizes this, I am surprised he misses its implications for identifying the most highly qualified MP. If the most dangerous criminals are nearly always male, isn’t it possible (by the same mathematical rule) that extremely qualified politicians are nearly always female?

Second, he hasn’t argued that Cabinet members need a level of competence beyond what most MPs have. Presumably and hopefully, MPs already have the competence needed to do their own job. If Cabinet members need something extra-special, he needs to explain what that is. It's relevant because he's asking us to consider the statistical likelihood of an MP having that something-special.

Related to that, he claims: “The possibility of identifying a competent person increases as the pool of available candidates increases.” This sounds logical, but as a practical matter it isn’t obviously meaningfully true for this particular scenario. Having a pool of one dozen, three hundred, or five thousand MPs may not increase the numbers of the exceedingly competent among them who have the je ne sais quoi to become Cabinet members. Maybe a few are dumb as rocks, maybe a few are luminaries. But I imagine they are, on average, simply the sorts of people who like to work in politics and who get voted in, and I suspect that most of them are fairly reasonable Cabinet material. If Trudeau needs to pick 17 out of some 88 women MPs and 18 out of 250 men MPs to form his Cabinet, I’m sure he can find reasonable choices. Jordan Peterson is worried that the best people for the job are languishing in the pool of untapped men MPs. He hasn’t convinced me because he doesn’t have a good definition of what makes someone best for the job. Maybe some of those untapped men have an extra IQ point or an extra smidgen of "conscientiousness" over the rest of the people who got tapped? So? The men might also lack the specific life experiences, career histories, and personality traits of the women MPs who got picked. They didn't have to fight sexism all their lives to get elected. What exactly is being ranked here? Lots of complex things. He isn't recognizing that.

And never mind that a PM surely has political reasons for choosing his/her inner circle. It's not just about who's intellectually or theoretically competent, but about who is like-minded, loyal, powerful, charismatic, networked, emotionally stable, won't be an embarrassment, and works well with all the other people who are being picked. These traits control whether everyone — as individuals and as a group — is competent in their ability to get stuff done. Getting stuff done is very important to a PM, and its practical importance will not change or diminish just because Peterson thinks raw IQ matters the most. Politicians will never choose their inner circle based on IQ tests alone—which suggests that IQ isn't the definition of political competence.

Third, Peterson rehashes one of the usual arguments against affirmative action, which is that you can’t hire people who aren’t in the hiring pipeline to begin with. The usual pro-affirmative action rejoinder is that you can make an effort to broaden your awareness of who is really in the pipeline and make an effort to reach out to them and even help set the stage for the long-term so everyone has better options in the future. Peterson misses the point that, when the PM establishes that the Cabinet should be half women, he’s setting expectations for how he wants government to run and implicitly suggesting that he’d like Canadians to elect more women MPs in the future (which, if it came to pass, would render this whole “problem” of Cabinet over/underrepresentation moot).

Fourth, I am confused why Peterson refers to Trudeau as “the absolute poster boy for…privilege” yet also says he doesn’t believe that “straight white men" enjoy privilege that is “generally undeserved.” Peterson says he doesn’t “assume” that such “patriarchy” exists, which I interpret as a euphemism for his not believing in it at all. Yet, having said he doesn’t believe in it, he then says that Trudeau benefits from it, and furthermore that Trudeau shouldn’t share it with women in an attempt to level the playing field. Go figure.

Fifth... his final paragraph is nothing more than a hostile, self-contradictory comment telling women that they don't experience real sexism today and also that they don't deserve their political positions and should be ashamed of their personal advancement.

The first section of the article, "Part One (Scandinavia)," also has its problems.

Posted by Tucker Lieberman at 2:19 AM