In Orwell's 1984, the government controls the population through mind-reading and memory replacement. This article was originally posted to Helium Network on Feb. 10, 2014.

Writing in 1948 after the conclusion of WWII, the English novelist George Orwell imagined a futuristic society in which the government had total control over its citizens. This future world formed the premise of his celebrated novel "1984." Many people read it as a warning about the possible consequences of excessive government control.

In recent history preceding the year 1984, the nations of the world merged into three superpowers. Britain, Australia and North America joined to become the empire known as "Oceania," and Oceania's form of government is called "Ingsoc" (short for "English Socialism"). This classification is not very helpful to the reader, as the government is sui generis. Oceania is in a permanent state of war, always against one of the two other empires, Eurasia and Eastasia, alternately. Meanwhile, Oceania's population is generally deprived of food and material goods. The government claims to produce goods, but somehow they are never distributed.

The powers-that-be are referred to as "Big Brother," but it is explicitly questioned within the novel, and never made clear, whether this is a nickname for a single person who actually exists or if it is simply convenient for the government to speak of itself as if there were a single leader above the maze of bureaucrats, control freaks, torturers and hit men. In London, where the story is set, the government is run out of four large government buildings: the Ministries of Truth, Peace, Love and Plenty. Unspeakably bad things can happen in these buildings.

Big Brother is able to read the mind of each person. A book forbidden within Oceania explains the role of mind-reading:


"The two aims of the Party are to conquer the whole surface of the earth and to extinguish once and for all the possibility of independent thought. There are therefore two great problems which the Party is concerned to solve. One is how to discover, against his will, what another human being is thinking, and the other is how to kill several hundred million people in a few seconds without giving warning beforehand."

The mind-reading, and not the war, is the subject of "1984." How mind-reading is accomplished is a mystery, and that is part of what makes it so terrifying. An argument could be made that the mind-reading is achieved through sophisticated behavioral observation. This is certainly part of Big Brother's strategy, as two-way "telescreens" are installed everywhere, including in each person's apartment, and may not be turned off or avoided for any prolonged period of time. (Big Brother detects physical signs of furtiveness, guilt, confusion, shock or dissent. The safest facial expression is one of "quiet optimism.") However, it's never explained who is watching on the other end, nor - to raise the same question that skeptics have raised about God - how those people are cognitively able to watch everyone all the time. There are also grounds within the novel for hypothesizing that there is a supernatural element to the mind-reading, or that it involves some form of science so sophisticated that it appears to the modern reader to be supernatural.

It is a serious crime to dissent or even to raise intelligent questions about Big Brother's intentions or machinations. Such heresies are therefore almost unheard of. They cannot be expressed, verbally or on paper, because Big Brother would instantly know about the crime through one of the telescreens. They cannot even be coherently thought, because one's mind is not private. Somehow, Big Brother knows. (This may have been a precursor to the plot of the 1961 Twilight Zone episode "It's a Good Life," in which even a small boy is able to thoroughly control the adults around them because he can read their minds and wield severe punishments.) 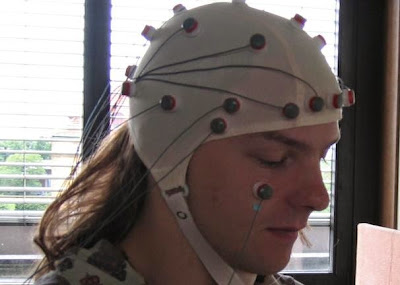 This explains why there is no rival political party, and why government workers are said to work simply for "the Party," which apparently has no need for a name. There is an "Inner Party" and an "Outer Party," but this is not an ideological distinction; rather, it simply reflects an individual's status within the Party, with Inner Party members living a relatively privileged lifestyle. The hero of "1984," Winston, is an Outer Party member who lives seven flights up in a half-century-old apartment building, all repairs for which must be requested through a do-nothing committee. His allowances for food and clothing are meager. He is a "member" of the Outer Party only in the sense that it is his job to work for the government; he is not doing so by choice or conviction.

Winston speaks with an acquaintance, Syme, who makes indirect political critiques such as: "Orthodoxy means not thinking - not needing to think. Orthodoxy is unconsciousness." Winston recognizes Syme's intelligence and thinks to himself that the government will not allow Syme to live very long, as "there was something that he lacked: discretion, aloofness, a sort of saving stupidity."

When the novel opens, Winston has just purchased a blank diary and a pen, the penalty for which is 25 years forced labor or perhaps death. (Most people who receive the death penalty are killed suddenly and are understood to have been "vaporized," after which the official position is that they never existed and are, in other words, "unpersons.") As a Party worker, Winston is not even supposed to shop at unapproved stores. He begins his unpracticed, stream-of-consciousness writing "in sheer panic." This is his way of dissenting. Recognizing that thoughtcrime was "the essential crime that contained all others in itself" and also that "the consequences of every act are included in the act itself," he wrote "DOWN WITH BIG BROTHER" in capital letters, assuming that "the writing of those particular words was not more dangerous than the initial act of opening the diary." Yet he does not want to be caught: "Now that he had recognized himself as a dead man it became important to stay alive as long as possible."

The possibility of such a thing as thoughtcrime interferes with the usual notion of truth. Whatever Big Brother wants people to believe is what they must believe, or else they will be guilty of thoughtcrime and severely punished. Big Brother therefore is the arbiter of truth. And the only way for Big Brother to present a coherent narrative about the present day is to remove all threats of competing facts that are remembered from the past.

For example, if Big Brother finds it expedient for people to believe that Oceania is at war with Eurasia, then it must expunge people's memory that Oceania was ever at war with Eastasia, rather than Eurasia. What is true now must have been eternally true. Through influencing people's memories, Big Brother is able to control what they "really believe," not merely what they are allowed to say they believe. As an Inner Party member puts it: "We control matter because we control the mind. Reality is inside the skull."

Winston understands this better than just about anyone. His job for the Outer Party is at the Ministry of Truth, where he spends his days reviewing supposed historical records and forging them anew according to instruction. "All history was a palimpsest, scraped clean and reinscribed exactly as often as was necessary," as he bitterly sees it. Identifying and correcting paper copies was a grueling task (Orwell did not imagine digital media). The characters referenced in Winston's stories may not have ever existed; the conflicts may not have taken place; the timelines may be off; the language may be anachronistic. Regardless, it is Winston's job to revise the records as instructed. It is the job of the rest of the populace to believe whatever records are kept by the Ministry of Truth; all competing reading material is forbidden. This is undoubtedly why keeping a diary, too, is illegal.

Winston is cursed with a good memory. He knows that what he's writing is, in most cases, false (or there would be no need for him to "correct" the record). Most people have trained their minds to forget immediately anything that competes with Big Brother's current narrative. Winston cannot forget. He is interested in the truth about things, and he knows this will be his downfall.

His gift for memory equips him for rebellion. As a practical matter, he is able to memorize addresses and instructions so that other people do not have to write them down or otherwise compromise themselves in sharing information with him. As he moves from keeping a diary to seeking out political dissenters, he recognizes that "he had moved from thoughts to words, and now from words to actions."

Winston's relationship with a younger woman, Julia, is one of the major plot elements of the novel. Unlike Winston, Julia is not interested in facts that contradict the Party's official version of events, nor is she interested in political theory. She is nonetheless a rebel insofar as she likes sex, something that is illegal. In this, Winston and Julia conspire together.

The Party grudgingly allows marriage only for the purpose of procreation and child-rearing. Winston and Julia blatantly transgress by escaping to a rural area, where they believe there is no telescreen, for the purpose of forming a relationship.

While willing to use adults for the effort of rearing small children, the Party destroys family ties by encouraging children to inform against their parents, and it conditions parents to believe that this is expected behavior. Winston experienced the sudden "disappearance" of his entire family when he was a small boy, and he has no illusions that, even if the Party would permit him to marry Julia, they would be allowed the sort of private enjoyment that they both want.

Torture leading to a forced confession is one of the more straightforward ways that the Party exerts control, as this activity has been used in the real world throughout all of human history. Orwell's gift here lies in his literary representation of the extreme physical pain and disorientation that Winston experiences under torture. He also draws the connection that physical torture can lay the groundwork for the goal of mental submission or mind control.

There are multiple layers of control in "1984." In the world of the future, as Orwell envisioned it, people suffer permanent war, chronic malnutrition, economic control, suppression of dissent, mind-reading, memory control, torture and forced confession, execution and the manipulation of family relationships. Any of these features may be read figuratively to represent struggles in the real world. Taken literally and in combination, they illustrate a world in which people have no freedom whatsoever.
Posted by Tucker Lieberman at 11:08 PM