A plot summary of 'The Optimist's Daughter' by Eudora Welty. In this novel, an American Southern woman releases herself from the grip of her memories of her family.

"The Optimist's Daughter" is a short novel by Eudora Welty (1909-2001) that won the Pulitzer Prize for Fiction in 1973. It follows a middle-aged woman in the American South as her father dies and as she copes with the aftermath of his death, finding herself left alone except for a heartless, foolish stepmother. The story is written in four parts. The first part is the father's long stay in the hospital, and the second part is his funeral. The third and fourth parts are devoted to the woman's memories of her family and to her redemptive realization that she can let go of her past.

Clint McKelva is a 71-year-old retired judge in Mount Salus, Miss. He has traveled to New Orleans, La. to see a particular eye doctor, Nate Courtland, a longtime friend. Judge McKelva reports having seen a fig tree while staring at a courthouse, and he says, "I was forced into the conclusion I'd started seeing behind me." Dr. Courtland diagnoses him with a slipped retina. Courtland prefers to delegate the necessary surgery to another doctor, but McKelva insists that he do it himself. He declares himself an "optimist" although he's warned the surgery is risky.

Two women have traveled to support McKelva: his forty-something daughter Laurel, described as "a professional designer of fabrics in Chicago," and his new wife Fay, a part-time typist who is perhaps even younger than Laurel and whom he married only a year and a half previously. Laurel's mother, Becky, is dead. The second wife, Fay, presents herself as a disagreeable, egocentric character from the moment of the diagnosis of her husband's slipped retina, as she cries: "I don't see why this had to happen to me." It seems that Judge McKelva still cares deeply for the memory of his first wife, as he asks for Becky, not Fay, as he wakes from surgery.

While waiting in New Orleans for Judge McKelva to recover, Laurel and Fay stay in separate rooms at a "decayed mansion" called the Hibiscus, a streetcar ride away from the hospital. One night, Laurel knocks on Fay's door hoping to acquaint herself better with Fay. Fay tells her that she had left Texas and come to Mississippi because all her family members were dead, and she implies that she looks down on Laurel for having left her father behind in favor of pursuing a career in Chicago. "Oh, I wouldn't have run off and left anybody that needed me," Fay said pointedly. "Just to call myself an artist and make a lot of money."

The judge – immobilized and bandaged across both eyes – shares a recovery room with another man who is blind and mostly deaf. A nurse, Mrs. Martello, watches over both patients. For weeks, Laurel reads Nicholas Nickleby aloud to her father in the recovery room. He weakens. One day, she arrives at the hospital to find a commotion between Fay and Mrs. Martello. The nurse is physically restraining Fay and bars her from Judge McKelva's room, claiming that Fay is "abusing" and stressing her husband during his recovery. Dr. Courtland immediately closes himself in with the patient and asks both women to stay away from the hospital.

At the Hibiscus again, Laurel tells Fay, "I believe he's dying." He does die, suddenly, without explanation. Fay screams, "You picked my birthday to do it on!" when Dr. Courtland delivers the news. Dr. Courtland's comments are regretful but not precisely apologetic; he seems to be frustrated by the medical case and sad more for himself than for his patient. Laurel and Fay travel back to Mississippi on a train that also carries Judge McKelva's body home.

Laurel is greeted at the train station by six women who were bridesmaids at her wedding to Philip Hand. (Laurel is a widow now, her husband having disappeared in combat only a year after their marriage. She still wears her wedding ring.) These bridesmaids include the eye doctor's sister, Miss Adele Courtland, and Tish Bullock. Laurel and Fay are driven to the home that Judge McKelva shared with Fay. It is filled with Judge McKelva's friends who make affectionate comments about the departed man, such as "He was never sick a day in his life!" and "Can't believe Clint's gone for good." Fay cries, "What are all these people doing in my house?" That night, Laurel sleeps in the same bed she had slept in as a child, while Fay sleeps in her predecessor Becky's bed.

The next day, the funeral is held at the house. Mr. Pitts, the undertaker, reveals his cosmetic work on the dead man's face. Laurel prefers the casket closed, but Fay exercises her authority as widow to demand that it be kept open.

A broad cast of characters turn out to mourn the judge, who was a public figure in the small town. The mayor says of Laurel: "This girl here's surrounded by her oldest friends! And listen further: bank's closed, most of the Square's agreed to close for the hour of services, county offices closed. Courthouse has lowered its flag out front, school's letting out early." The mourners turn out platitudes and generally make buffoons of themselves, retelling funny tales of Judge McKelva's alleged antics as a younger man, which Laurel suspects are not entirely true. "I don't think that was Father," she tells Tish, in reference to an especially unlikely tale of bravado, and she thinks to herself: "The mystery in how little we know of other people is no greater than the mystery of how much." Laurel has a more serious attitude during the funeral, but few of her thoughts are made explicit. She does say aloud: "He loved my mother." The judge is buried in the local cemetery, although Fay refuses to bury him near his "old wife."

Among the visitors are Fay's mother, who is referred to as Mrs. Chisom, and several of Fay's siblings. Mrs. Chisom elaborates that they are all still living in Texas. "Yes, me and my brood believes in clustering just as close as we can get," she says. This contradicts Fay's previous story to Laurel that her entire family was dead. One of Fay's sisters compliments the family on the "large crowd" that was drawn to the funeral, "without even having to count those Negroes." After the funeral, Mrs. Chisom asks Fay if she'll consider allowing the entire family to move into the large house she is inheriting.

Laurel calls Fay on her previous claim that her family was dead. Fay is nonplussed: "It's better than some lies I've heard around here...at least my family's not hypocrites. If they didn't want me, they'd tell me to my face."

After all is said and done at her childhood home in Mount Salus, Laurel is consumed by memories of her parents that are triggered by the furniture, garden and books whose spines are colored with lamp-black and whose words she can remember hearing her parents read aloud to each other in bed. Someone has already cleaned out her father's desk. She insists on returning to Chicago, although some friends suggest that she stay. 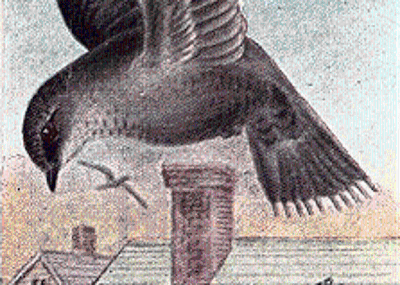 Alone at last, Laurel discovers a chimney swift in the house. Anxiously pursuing the bird in the dark, she is flooded with thoughts: about Fay, about her longing for her dead mother. She finds her mother's sewing machine engraved with the year 1817, and then she is surprised to find her mother's personal papers intact. She recalls many details about her parents, especially that Dr. Courtland had removed a cataract from her mother's eye, and that her mother had subsequently suffered a stroke and spent five years in bed, disoriented, "in exile and humiliation," before dying.

Laurel recalls parts of her brief marriage to Phil: their honeymoon in Cairo, Phil's work designing houses, his death by the kamikaze in the Pacific. When morning comes, Laurel enlists the help of a man named Mr. Cheek in catching the chimney swift, but he does not succeed. A woman named Missouri arrives and opines that the "vermin" bird doesn't fly out the open door because "they just ain't got no sense like we have." Laurel catches the bird and brings it outside.

Then, standing in the driveway, Laurel burns the family papers and books she has found. When Fay returns, Laurel accuses her of dirtying and damaging the breadboard that her husband had made for her mother. Fay replies that "it's just an old board" and "it's my house now." Laurel tells Fay, enigmatically, that her mother had predicted that Fay would come into her house someday. Laurel says she is taking the breadboard back to Chicago, and she lifts it out of Fay's reach; Fay accuses her of threatening to strike her with it, and Laurel admits to herself that "she had been ready to hurt Fay." At the last moment, she chooses to leave the breadboard behind as she departs the house, saying, "I think I can get along without that too."

"The Optimist's Daughter" is an unusual novel. It doesn't have an action-driven plot, and neither does it feel primarily like a character study given that the main character is so silent and challenging to understand. It is about a woman who, in loneliness and under unrelenting pressure, finally cracks and has a psychological breakthrough.

Illustration by Chester A. Reed, published in "The Bird Book," 1915 © Public domain in the United States.

Posted by Tucker Lieberman at 9:08 PM