Letters on Demonology and Witchcraft, written in 1830, is a nuanced and opinionated compilation of anecdotes about European witch-hunts and superstitions about magical beings. The book is a valuable resource for anyone interested in learning more about specific witch trials, including names, dates, places, trial records, tortures, and last words. Although the topics are a bit disorganized, the language is lyrical, entertaining and compelling.

The author, Sir Walter Scott, was a lawyer by trade, interested in history and poetry, and is today famous for his innovative novels. The Scotsman's title came from a baronetcy he received from the Prince in gratitude for locating the hidden crown jewels within Edinburgh Castle.

To understand the work as a whole, it is helpful to know a bit about Scott's theological approach. He declares his Christian stance early on. To him, this includes a belief in the soul, something that is relevant to his discussion about whether supernatural beings exist. He insists that "all men, except the few who are hardened to the celestial voice, [know] that there is within us a portion of the divine substance, which is not subject to the law of death and dissolution." This passage hints that he does not find atheism worth discussing. Other passages indicate that he holds the Jewish people in particularly low esteem.

Scott believes that miracles are, in principle, possible, insofar as God might choose to work a miracle, but he believes that God has always been stingy with their application. He says that, of course, a Christian necessarily believes that miracles were performed during biblical days, "by which the ordinary laws of nature were occasionally suspended, and recognises the existence in the spiritual world of the two grand divisions of angels and devils, severally exercising their powers according to the commission or permission of the Ruler of the universe."

Yet, even in Biblical times, such miracles were rare. Scott believes that God was so angry with the Jews that he denied them the opportunity to see the resurrection of Christ. "Shall we suppose that a miracle refused for the conversion of God's chosen people," he says, drawing a comparison between Jesus and the alleged ghost of Sir George Villiers, "was sent on a vain errand to save the life of a profligate spendthrift?" In other words, if God chose not to work miracles that would have been of great importance, why should anyone believe that the ghosts of ordinary people are permitted to walk about for relatively trivial purposes?

Furthermore, he believes that miracles no longer occur. "Each advance in natural knowledge teaches us that it is the pleasure of the Creator to govern the world by the laws which he has imposed, and which are not in our times interrupted or suspended," he writes.

These positions are, however, complicated by his relation of a tale about the conversion of the Icelanders to Christianity. The Icelanders believed that the anger of the gods produced volcanic eruptions. Christian missionaries pointed out that the gods would have had nothing to be angry about before people appeared on earth, yet the volcanoes still erupted then; and if natural forces could cause volcanoes at the beginning of time, surely they can still cause volcanoes today, which means there is no reason to appeal to the Norse gods to explain the natural world. (Ironically, this form of argument could be used against Christian theology, too, but no matter.)

This is only the philosophical frame of the book; not its main content, which is mostly very colorful. "Letters on Demonology and Witchcraft" contains anecdotes about everything from poltergeists that smash china teacups to the apparition of a skeleton that never leaves a man's field of vision, to sailors who drop their murder victim into the cauldron that feeds their slaves. Scott relates at length the legend of Thomas of Erceldoune, also known as Thomas the Rhymer, and his enchanted affair with a queen. He points out that Robert Kirke, who first wrote a Gaelic translation of the Psalms, also wrote a credulous essay called "Subterranean and for the most part Invisible People heretofore going under the name of Elves, Fawnes, and Fairies, or the like." This was written around 1691, and published in 1815 with Scott's backing.

Despite his professed religious orientation — which, despite its expression in uncompromising terms, still feels like an obligatory formality of the times — Scott's many personal theories about the alleged fairy world usually trend toward the skeptical and the rationalistic. His sympathy and outrage about witch-hunts is manifest. 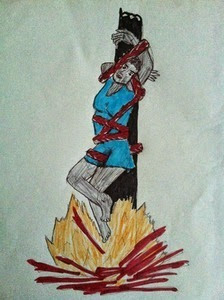 Thousands of European women were burned on allegations of witchcraft in the 16th and 17th centuries. Drawing by Tucker Lieberman.
On the cause of mass delusion, he writes: "most are willing to sacrifice the conviction of their own senses, rather than allow that they did not witness the same favourable emblem" as their compatriots claim to have witnessed.  Delusion can also be individual, and some highly superstitious individuals can work themselves into a frenzy of fear, such that if they believe they are cursed to die, they actually die.

On the cause of nightmares, he posits that people integrate sensory input from the real world into their dreams.

On the cause of false confessions to witchcraft: some are tortured until they confess, others embarrassed by the mere accusation of witchcraft resign themselves to death by execution rather than face being shunned by their neighbors or, if they are superstitious, being tempted by the Devil.

Scott's patience with superstitious people sometimes wears thin, as when he sighs that "the learned Councillor de Lancre" worried about sorcerous interference with the district of Labourt apparently only because "the men are all fishers and the women smoke tobacco and wear short petticoats." Through the sarcasm, one can see that he finds such "arguments" for the abundance of witchcraft to be a haystack of prejudicial nonsense.

He asserts that the famous verse in Exodus 22, which prescribes death for a witch, uses a Hebrew word that actually means "poisoner." Prior to the 15th century, Scott argues, the Catholic Church was more tolerant of alleged small-time witches because they afforded an opportunity for clergy to be employed in reversing the ill effects of their spells. Prosecutions for witchcraft in the more modern sense, not understood simply as lethal scheming, but as a kind of sorcery that was essentially heretical, were rare in Europe until a late 15th-century papal bull of Innocent VIII sought to connect witchcraft with the Waldensian rebellion that empowered lay people to preach and to read the Bible in translation. The panic about witches infected civil law as well. Shortly after King James took the English throne in 1603, a detailed law was passed declaring witchcraft a felony.

Scott's book highlights the illogical claims and the manifold cruelties of witch hunts and ends on a plea for a more humane future.

Posted by Tucker Lieberman at 9:13 PM