'Invasion of the Body Snatchers': Vulnerability and American Identity

Originally posted 27 August 2007 to the JVoices blog which will be taken offline soon. 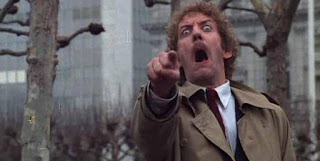 In Jack Finney’s 1954 novel The Body Snatchers, alien seed pods fall to earth, grow next to sleeping people, produce emotionless clones of their bodies, and finally destroy the original humans. It is impossible to distinguish a cloned body from the original body, except that something is behaviorally amiss: they show no facial expressions and take no interest in anything other than their assigned tasks. The clones seem to have no purpose except to cultivate more seed pods to grow more of their kind. To this end, they communicate with each other swiftly and ruthlessly, through unseen channels. Their goal is world domination. Occasionally they attempt to justify this to humans by explaining that they are relieving humanity of its suffering. Finney’s novel was quickly made into a sci-fi film, Invasion of the Body Snatchers, and spawned a color remake in 1978.

Many interpreted the story as a social or political commentary, particularly in the wake of McCarthyism, when neighbors suspected each other of being secret Communists. In his essay published in Play It Again, Sam: Retakes on Remakes, Robert Eberwein points to the different zeitgeists of the original film and the ’78 remake, and suggests a meaningful distinction between the symbolism of the “pod people” in the first film–with their implication of being swept up by some diabolical mass movement and losing free moral agency–and those in the second film, which “concentrated on conformity and surrendering the capacity to feel”.

This year, 2007, brings us the special effects remake. Without even seeing The Invasion, the first thing we notice is that “Body Snatchers” has been dropped from the title. That’s because there are no pods or “pod people” anymore. The alien pandemic now strikes in the form of an illness that renders its victim unconscious to his or her former self, and yet walking, talking, and ruthlessly coordinating the infection of more humans.

The film has also been updated to reflect the current world security situation and the violence reported via television and radio news every day. We are reminded, at the beginning of the movie, that suicide bombs exploding in the Middle East are causing massive casualties, and there are diplomatic standoffs in North Korea. We also see a Russian and Czech diplomat sniping at each other at a dinner party. These sorts of concerns contrast with the relatively peaceful, domestic lives of the well-to-do, white American protagonists.

After the alien sickness descends and turns people into mindless automatons, the world situation flips upside down. The U.S. city portrayed in the film becomes the scene of riots and general lawlessness because of the infected pursuing the uninfected. The police are the first to cross over, and when they show up it is only to drag someone off to forcibly infect them, so no one is able to call for help. But everywhere else on Earth (if the television reports are to be trusted), infected people have installed an instantaneous and permanent peace with each other.

The difference could be explained with some midrashic effort. Perhaps the infected journalists deliberately painted a rosy picture of other countries, or perhaps it is possible for peace to be waged when only the highest government officials are infected with a virus that takes the form of mutual cooperation. But the film does not offer such explanations. What we actually see is a violent West and a peaceful East. And this is portrayed as an unacceptable, unnatural flip.

There are layers of “otherness” depicted in the film. One sort is nationality. We (Americans) eat breakfast with our families in nice clean kitchens; they (foreigners in the Eastern hemisphere) blow each other up. The other sort is the infection. We (humans) are unique, special, emotive; they (infected half-aliens) are uncanny and doll-like. These two sorts of otherness are interwoven in the following way: Normal humans are vulnerable and must endure daily life with a measure of fear. The infected humans lack this fear. Ironically, the humans fear losing their fear. Their vulnerability defines them; because of it, they exist and have identity. What they are ultimately most vulnerable to is the loss of their vulnerability. This vulnerability is also a peculiarly American theme, where, in the expected order of things, people from other countries are expected to actually be vulnerable and occasionally blow each other up, while Americans are only expected to feel vulnerable as part of their civic duty.

If McCarthyism was an interpretation for the 1950s, and social conformism was an interpretation for the 1970s, then a cultivated xenophobia in the name of self-preservation is an interpretation for 2007. Ever since the US suffered a terrorist attack, many have felt that the government and the media have tried to flash-freeze and cultivate fear in us. Six years later, the same enduring fear has started to become part of our culture and our very identity as Americans. Look how different regions respond to the alien invasion in the movie: the Middle East becomes quiet, Asia has peace treaties, but a continuous riot is launched in the name of catching the last remaining uninfected humans in the metropolitan United States and forcing them to be peaceful like everyone else on the planet. The horror! Run, don’t walk!

The aliens invaded. They came to bring peace. Peace stole our American identity. What is the identity and what is the mission we are trying to save?

Posted by Tucker Lieberman at 11:05 AM